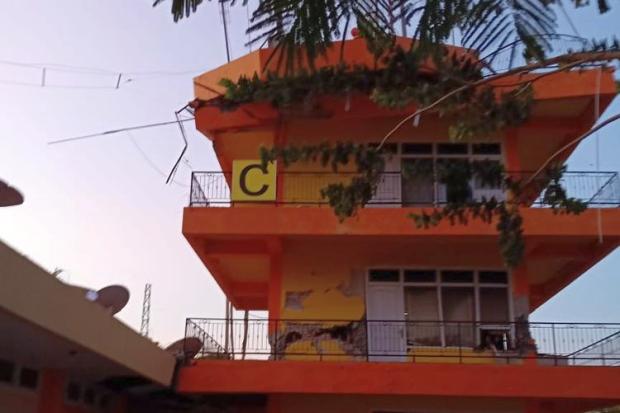 A damaged air traffic control tower at the Mutiara Sis Al Jufri Airport in Palu, Central Sulawesi on Friday. The tower was about to collapse as a result of a 7.4-magnitude earthquake that rocked the province. The airport also suffered damage to its navigation system as well as 500 meters of its 2,500-m-long runway. (File photo from Kompas.com via The Jakarta Post)

Anthonius Gunawan Agung, 21, who was on duty as an air traffic controller (ATC) at Palu airport in Central Sulawesi, died on Saturday due to injuries he suffered after jumping off an ATC tower when the 7.4-magnitude earthquake hit the area.

Didiet KS Radityo, the corporate secretary of the Indonesian Flight Navigation Service Institution (AirNav Indonesia), told The Jakarta Post that Agung, who worked for AirNav Indonesia, died in a hospital on Saturday morning.

Agung, who was working on the fourth floor of the ATC tower at Mutiara Sis Al Jufri Airport in Palu, had just cleared the lane for the departure of a Batik Air plane on Friday afternoon. He was waiting for the plane to take off.

When the plane was about to take off, the tremor hit but Agung remained in the tower.

After the plane took off, Agung jumped from the tower because the roof had collapsed.

READ: Central Sulawesi quake: What we know so far

Didiet said AirNav Indonesia had prepared a helicopter to take him to Balikpapan for further treatment on Saturday morning.

“But God had another plan. He passed away 20 minutes before the helicopter arrived,” he added.

“Agung dedicated himself to his job until the end of his life and did not leave the control tower until the plane took off, even though the earthquake had struck.”

Yohanes Sirait, the public relations manager at AirNav Indonesia, said in a press statement on Saturday that the institution had sent its condolences after the tragedy.

“Our deepest condolences. May Almighty God bless our family (Agung) and other victims of the earthquake in Donggala regency,” he said. /atm