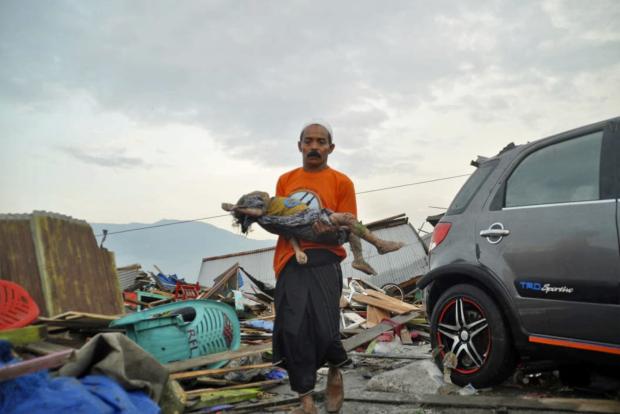 A man carries the body of a child who was killed in the tsunami in Palu, Central Sulawesi, Indonesia, Saturday, Sept. 29, 2018. A powerful earthquake rocked the Indonesian island of Sulawesi on Friday, triggering a 3-meter-tall (10-foot-tall) tsunami that an official said swept away houses in at least two cities. (Photo by RIFKI / AP)

PALU, Indonesia — Residents too afraid to sleep indoors camped out in the darkness Saturday while victims recounted harrowing stories of being separated from their loved ones a day after a powerful earthquake triggered a tsunami that unleashed waves as high as 6 meters (20 feet), killing hundreds on the Indonesian island of Sulawesi.

The official death toll stood at 384, with all of the fatalities coming in the hard-hit city of Palu, but it was expected to rise once rescuers reached surrounding coastal areas, said disaster agency spokesman Sutopo Purwo Nugroho. He said others were unaccounted for, without giving an estimate.

The nearby cities of Donggala and Mamuju were also ravaged, but little information was available due to damaged roads and disrupted telecommunications.

‘No time to save ourselves’

Nugroho said “tens to hundreds” of people were taking part in a beach festival in Palu when the tsunami struck at dusk on Friday. Their fate was unknown.

Hundreds of people were injured and hospitals, damaged by the magnitude 7.5 quake, were overwhelmed.

Some of the injured, including Dwi Haris, who suffered a broken back and shoulder, rested outside Palu’s Army Hospital, where patients were being treated outdoors due to continuing strong aftershocks.

Tears filled his eyes as he recounted feeling the violent earthquake shake the fifth floor hotel room he shared with his wife and daughter.

“There was no time to save ourselves. I was squeezed into the ruins of the wall, I think,” said Haris, adding that the family was in town for a wedding. “I heard my wife cry for help, but then silence. I don’t know what happened to her and my child. I hope they are safe.”

It’s the latest natural disaster to hit Indonesia, which is frequently struck by earthquakes, volcanic eruptions and tsunamis because of its location on the “Ring of Fire,” an arc of volcanoes and fault lines in the Pacific Basin.

In December 2004, a massive magnitude 9.1 earthquake off Sumatra island in western Indonesia triggered a tsunami that killed 230,000 people in a dozen countries.

Last month, a powerful quake on the island of Lombok killed 505 people.

Palu, which has more than 380,000 people, was strewn with debris from the earthquake and tsunami. A mosque heavily damaged by the quake was half submerged and a shopping mall was reduced to a crumpled hulk.

A large bridge with yellow arches had collapsed. Bodies lay partially covered by tarpaulins and a man carried a dead child through the wreckage.

The city is built around a narrow bay that apparently magnified the force of the tsunami waters as they raced into the tight inlet.

Indonesian TV showed dramatic smartphone video of a powerful wave hitting Palu, with people screaming and running in fear. The water smashed into buildings and the mosque.

Nina, a 23-year-old woman who goes by one name, was working at a laundry service shop not far from the beach when the quake hit. She said the quake destroyed her workplace, but she managed to escape and quickly went home to get her mother and younger brother.

“We tried to find shelter, but then I heard people shouting, ’Water! Water!’” she recalled, crying. “The three of us ran, but got separated. Now I don’t know where my mother and brother are. I don’t know how to get information. I don’t know what to do.”

The earthquake left mangled buildings with collapsed awnings and rebar sticking out of concrete like antennae.

Roads were buckled and cracked. The tsunami created even more destruction. It was reported as being 3 meters (10 feet) high in some areas and double that height elsewhere.

“We got a report over the phone saying that there was a guy who climbed a tree up to 6 meters high,” said Nugroho, the disaster agency spokesman.

Communications with the area were difficult because power and telecommunications were cut, hampering search and rescue efforts. Most people slept outdoors, fearing strong aftershocks.

“We hope there will be international satellites crossing over Indonesia that can capture images and provide them to us so we can use the images to prepare humanitarian aid,” Nugroho said.

Indonesia is a vast archipelago of more than 17,000 islands that’s home to 260 million people. Roads and infrastructure are poor in many areas, making access difficult in the best of conditions.

The disaster agency has said that essential aircraft can land at Palu’s airport, though AirNav, which oversees aircraft navigation, said the runway was cracked and the control tower damaged.

AirNav said one of its air traffic controllers, aged 21, died in the quake after staying in the tower to ensure a flight he’d just cleared for departure got airborne safely. It did.

More than half of the 560 inmates in a Palu prison fled after its walls collapsed during the quake, said its warden, Adhi Yan Ricoh.

“It was very hard for the security guards to stop the inmates from running away as they were so panicked and had to save themselves too,” he told state news agency Antara.

Ricoh said there was no immediate plan to search for the inmates because the prison staff and police were consumed with the search and rescue effort.

“Don’t even think to find the inmates. We don’t even have time yet to report this incident to our superiors,” he said.

Indonesian President Joko “Jokowi” Widodo said Friday night that he instructed the security minister to coordinate the government’s response to the disaster.

Jokowi also told reporters in his hometown of Solo that he called on the country’s military chief to help with search and rescue efforts.

Sulawesi has a history of religious tensions between Muslims and Christians, with violent riots erupting in the town of Poso, not far from Palu, two decades ago.

Indonesia is the world’s most populous Muslim country. /atm 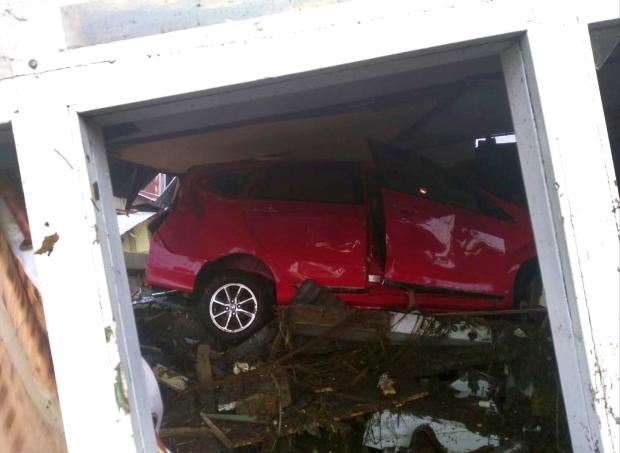 A car swept away by tsunami is seen stuck under a damaged building in Palu, Central Sulawesi, Indonesia, Saturday, Sept. 29, 2018. (Photo by DEDE BUDIYARTO via AP) 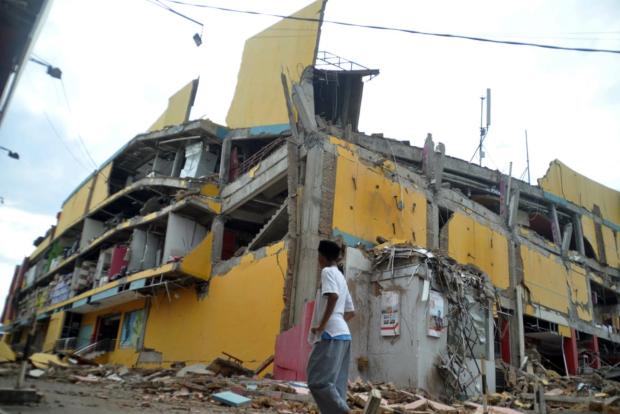 A man surveys the damage following earthquakes and a tsunami in Palu, Central Sulawesi, Indonesia, Saturday, Sept. 29, 2018. A tsunami swept away buildings and killed large number of people on the Indonesian island of Sulawesi, dumping victims caught in its relentless path across a devastated landscape that rescuers were struggling to reach Saturday, hindered by damaged roads and broken communications. (Photo by RIFKI / AP) 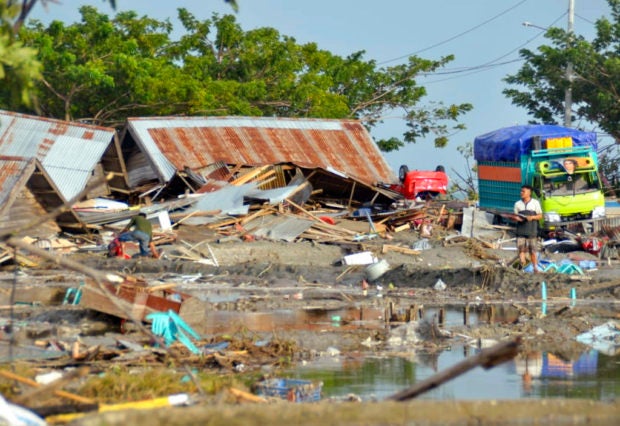 A man stands amid the damage caused by a tsunami in Palu, Central Sulawesi, Indonesia, Saturday, Sept. 29, 2018.  (AP Photo)

Read Next
Woman who asked President to stop quarrying in Cebu missing
EDITORS' PICK
Pharmally’s Twinkle Dargani in tears when asked about missing documents
Two more sites at Robinsons Malls for temporary offsite passport services
Holidays made best with Acer’s ‘Holidays at Home’ raffle promo
BIR audits tax compliance of Pharmally
Corruption in PH: Where presidential aspirants stand
Smart offers wireless fiber-like speeds to Filipino homes with country’s first 5G Prepaid Home WiFi
MOST READ
Roque ‘hurt’ after presidential aspirant did not adopt him in Senate lineup
Pharmally’s Twinkle Dargani in tears when asked about missing documents
Gordon says Rose Nono Lin is husband’s dummy, but she denies senator’s accusations
Gordon to Duterte: ‘How dare you ask for Filipinos’ vote when you failed them?’
Don't miss out on the latest news and information.