Syria, North Korea to have their say at UN gathering 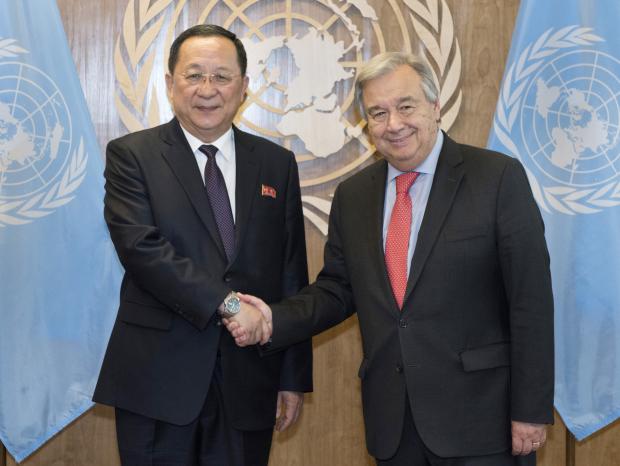 UNITED NATIONS — Two of the planet’s most troubled hot spots are sending envoys to have their say before the world on Saturday.

North Korea and Syria, places of international concern that spill trouble beyond national borders, are to appear before the U.N. General Assembly at a time when both countries could be on the cusp of significant developments.

Trump and his secretary of state, Mike Pompeo, are trying to regain momentum more than three months after the Singapore summit with North Korea’s Kim Jong Un, and are pushing for a second meeting in their quest to get Pyongyang to renounce its nuclear ambitions. Syria could be on the verge of emerging from seven years of bloody conflict that included the use of chemical weapons.

Pompeo is planning to visit Pyongyang next month to prepare for a second Kim-Trump summit. Japanese Prime Minister Shinzo Abe has also said this week that he wants to meet with Kim. Still, there is widespread skepticism that Kim will actually relinquish an arsenal that Pyongyang likely sees as the only way to guarantee the Kim dynasty’s continued authoritarian rule.

In a wide-ranging news conference at the U.N. on Wednesday, Trump said he was optimistic Kim wants to get a deal done because of their close ties.

“We have a very good relationship. He likes me, I like him, we get along,” Trump said. “He wants to make a deal and I’d like to make a deal.”

On Wednesday, Pompeo met with North Korean Foreign Minister Ri Yong Ho on the sidelines of the General Assembly. Pompeo said on Twitter that his meeting with Ri was “very positive,” but did not give any details.

Syria’s foreign minister, Walid al-Moallem, will take the podium with his government firmly in control of most of the territory the opposition held for many of the seven years of the conflict.

A military offensive by Assad’s forces on Idlib, the last remaining rebel-held region was averted last week in a deal reached between Russia and Turkey to set up a demilitarized zone along the western, southern and eastern edges of the province.

In his speech before the Security Council Wednesday, Trump warned Assad against a far-reaching offensive on the northeastern region. “I hope the restraint continues. The world is watching.”

More than 400,000 people have died in seven years of civil war, according to the UN’s envoy, Staffan de Mistura. /atm