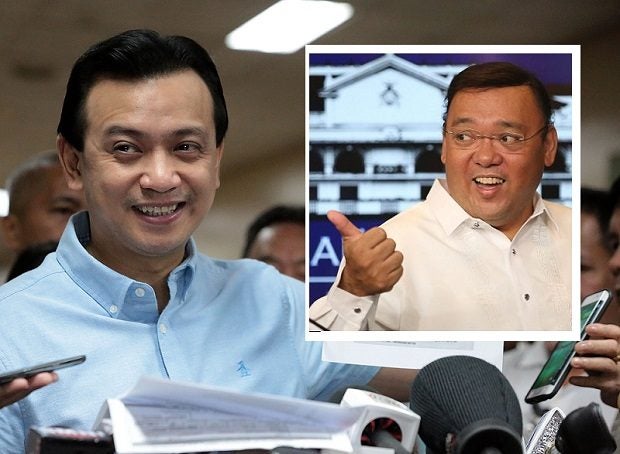 For a critic who loves the limelight, the circumstances facing Sen. Antonio Trillanes IV are not part of any political persecution but a “political gift,” Malacañang said Wednesday.

In an interview over CNN Philippines’ “The Source,” Roque denied Trillanes was a victim of political persecution.

After President Rodrigo Duterte issued Proclamation No. 572 and declared the amnesty given to Trillanes as void from the start, the senator has repeatedly held media briefings criticizing the President and the order while seeking refuge in the Senate.

On Tuesday, the Makati Regional Trial Court Branch 150 granted the petition of the Department of Justice to issue a warrant for the arrest against Trillanes and issued a hold order against him. The senator is out on bail.

Roque said the senator should not complain about political persecution because the voiding of his amnesty and his arrest warrant “went through the correct process.”

“It was decided by the courts and no one can dispute the integrity and independence of the courts in the Philippines,” he said.

Trillanes is facing a separate coup d’etat case before the Makati RTC Branch 148, which is non-bailable.

Trillanes must abide by the ruling of the court, Roque added.

According to Roque, Duterte only wanted Trillanes “to be accountable for his past acts” as Malacañang denied that the latter was a victim of political persecution.

He denied the President was obsessed with the senator.

The senator on Tuesday told reporters at the Senate that Duterte was “obsessed” in running after him.

Trillanes, a former Navy officer, led the coup attempts in 2003 and 2007 to oust then-President Gloria Macapagal-Arroyo.

“He (Duterte) wants him to be accountable for his past acts,” Roque told INQUIRER.net on Wednesday, a day after the Makati Regional Trial Court (RTC) issued an arrest warrant against the senator for rebellion charges.

Trillanes turned himself in to the police on Tuesday afternoon and was released after posting a P200,000 bail.

Roque said the President was aware of the developments in the case of Trillanes.

“He is aware of what is happening,” he said.

Asked if the President wanted Trillanes to see Trillanes in jail again, Roque said, “He’s (Duterte) job is to implement the law. If that is the consequence so be it.” /cbb

Panelo to Trillanes: Stop acting like a victim, face your arrest warrant