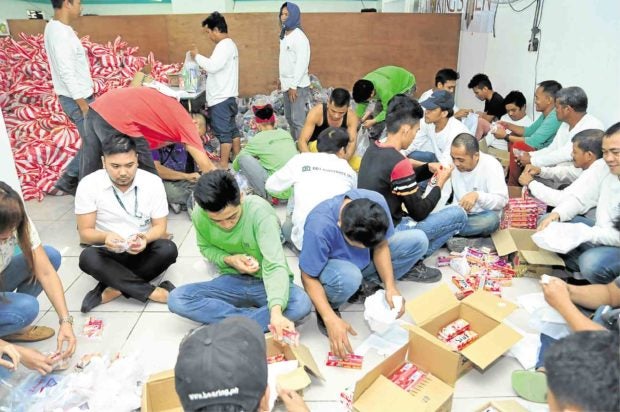 GOOD SAMARITANS Volunteers at Bangon Northern Luzon command center prepare aid packages for distribution to survivors of Typhoon “Ompong” in Cagayan province and other areas in the north. —CONTRIBUTED PHOTO

An aid campaign, dubbed Bangon Northern Luzon, started to make its impact felt among survivors of Typhoon “Ompong” (international name: Mangkhut) in Cagayan province and the regions of Ilocos and Cordillera.

In a statement, aid organizers said the campaign had already distributed 1,500 packages to families with the help of the Office of the Presidential Adviser for Northern Luzon, Raul Lambino.

Lambino, who is also administrator and chief executive officer of the Cagayan Economic Zone Authority, is acting as coordinator of the relief effort.

Joseph Garcia, spokesperson for Andres P. Tamayo Sr. Foundation, said the campaign’s aim was to address the immediate needs of families hit by Ompong, the strongest typhoon to hit the Philippines this year.

The foundation is a lead organization in the campaign.

The statement quoted Garcia as saying the aid campaign sought to reach parts of northern Luzon that bore the brunt of Ompong’s 205-kilometer-per-hour winds.

Two construction firms behind Tamayo Foundation—DDT Konstract Inc. and Whiteport Inc.—initiated the aid campaign through corporate contributions, according to Garcia.

The two companies had carried out relief work in the past and were now among six partners in Bangon Northern Luzon.