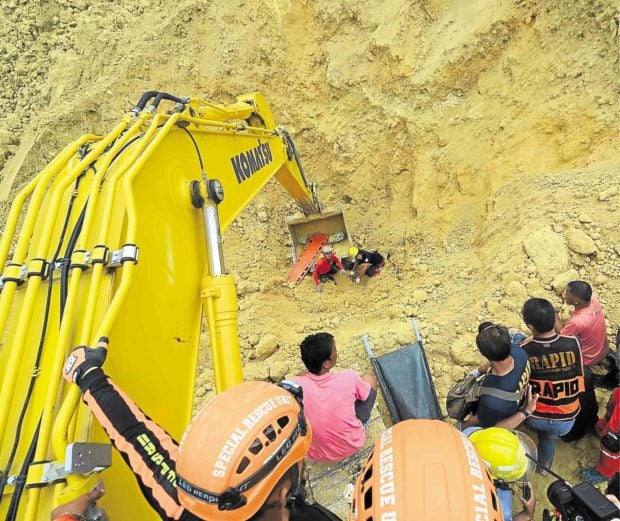 DISGORGING DEATH Rescue workers dig up bodies and load these onto a backhoe at the landslide site in the village of Tinaan in Naga City, Cebu province. —AFP

NAGA CITY, Cebu — The number of corpses dug up from the site of a landslide in a village here has risen to 46.

The recovery of bodies continued as support for a stop to quarrying, being blamed by residents for the tragedy, grew louder with a statement from Cebu’s highest ranking Church official.

At least 30 more people were missing and presumed dead although rescue and retrieval officials refused to give up hope that survivors would be found.

The Office of Civil Defense, an agency under the Department of National Defense, sent life-detecting machines to the site of the landslide on Saturday.

He said rescuers planned to dig tunnels through the collapsed mountain to search for survivors or bodies.

Naga City Councilor Junjie Cruz, spokesperson for the city government, expressed gratitude to rescuers and all those who sent aid.

He said at least 4,031 individuals were taking shelter at different evacuation centers in the city.

“Our target now is the relocation of these people,” he said.

A number of individuals living near the landslide area have evacuated although a few chose to remain.

Archbishop Jose Palma supported calls to stop quarrying, which families living in the landslide site blamed for the tragedy.

“In moments like this, we do have a lot of questions,” Palma told families of those who died in a dialogue at the Naga City badminton court on Saturday.

“We may ask God why he allowed this to happen and silence is the answer we received,” he said.

The tragedy, however, should not drive people to doubt God.

He said he considered a decision by Environment Secretary Roy Cimatu to suspend all quarrying in Central Visayas and seven other regions a “wise move.”

“If there is a need to close these companies for good, then we should do it,” he added.

“We should be mindful of its effects on life and the community,” said Palma, who blessed and prayed over coffins of the dead.

Palma said a thorough investigation should be done to give justice to victims.

“We were saying over and over again, we should not desecrate the blessings we have from above,” he said.

“People know that sooner or later, somehow, when we are reckless with the environment or we take it for granted, it will boomerang on us,” he said.

“Justice should be served,” he added.

Cimatu on Friday sacked the top four officials of the Mines and Geosciences Bureau (MGB) in Central Visayas who had said cracks found in the mountains of Tinaan, the village worst hit by the landslide, were natural phenomena and not caused by quarrying by Apo Land and Quarry Corp. in the village.