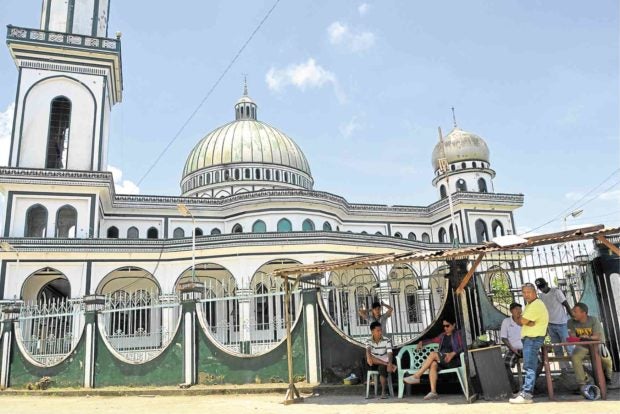 SLOW RETURN TO NORMALCYLife in parts of predominantly Muslim Marawi City outside the main battle zone is slowly returning to normal starting with its mosques. —DIVINA M. SUSON

MARAWI CITY — Displaced residents traveled for up to six hours to return and wield their most potent weapon for change, voting, in a city still nursing fresh wounds from a war brought upon it by extremists who wanted to turn it into a terrorist bastion.

It was democracy coming to life, according to one official who monitored the conduct of the polls.

The elections for village and youth council officials, set nationwide in May 13, have been moved to Sept. 22 in Marawi after 24 of its villages were all but wiped off the map by an attempt by Islamic State (IS) followers to set up an IS base and the government’s armed response to thwart it.

Life has not returned to normal in the city but the elections proceeded like they did in the past not only in Marawi but elsewhere — marred by vote-buying, pockets of violence and claims of fraud.

Residents, who had sought refuge during the war in places hundreds of kilometers from Marawi, endured long hours of travel just to cast their ballots in the city’s first political exercise after the war on IS last year.

One of them was Feliza Toylo, 69, who traveled for four hours from Misamis Occidental where she and her family fled during the war.

Toylo said she made sure she voted because she wanted a candidate, a former neighbor in the village of Kadingilan, to win.

Kadingilan was one of the 24 villages in ground zero of the fighting between local IS affiliates and government soldiers.

Like Toylo, Lourdes Sardanas, 49, traveled six hours from Pagadian City to vote for a candidate she believed would bring normalcy back to Marawi.

Toylo and Sardanas were dressmakers when war broke out in Marawi. They longed to return though they said they had been earning in their temporary homes.

“My income now is very different when I was in Marawi,” Sardanas said.

Voters acted like these elections were the most important in their lives.

Waiting for a wheelchair

Hadji Rasul Taratingan, 59, of the village of Marinatu, checked for his wife’s name on a voters’ list after casting a vote himself.

His wife, Zaalica Miondas Pango, was recuperating from a stroke and could hardly walk but did not want to pass off the chance to vote.

“I have to first confirm that her name was there because she’s having a hard time walking,” Taratingan said.

The reason Zaalica wanted to badly to vote? She was hoping her candidate would give her a wheelchair. 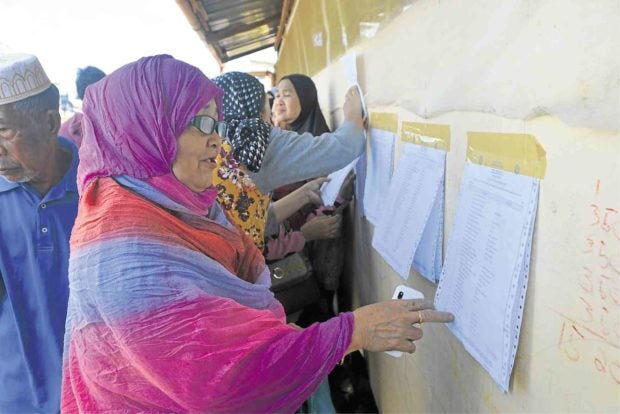 RIGHT OF SUFFRAGEVoters, many of them returning from evacuation sites just to cast their ballots, look for their names on a list at a polling center in Marawi City. —DIVINA M. SUSON

“We’ve been waiting for a wheelchair for so long,” Taratingan said. “We asked from a city official but we were not given a wheelchair,” he added, breaking in tears.

The elections were pockmarked with reports of vote-buying and brawls.

A voter, Richam Carem Labiste Suba, was held after he was caught with election paraphernalia attached with P20-bills inside a polling center in the village of Sagonsongan.

Suba denied the money was to buy votes. SPO3 Ali Rangiris, of the city police station, said Suba had to explain to the Commission on Elections.

Suba said the money was to be given to voters for them to buy water.

Four hours after the polling center opened in Sagonsongan, police fired warning shots when supporters of opposing candidates had a fistfight.

Two men involved in the brawl had been brought to the police station.

“He will be voting using my name,” Abdulcarim told reporters.

The unidentified man was brought out of the polling center, away from angry relatives of Abdulcarim.

Around 6 a.m., hundreds of voters were already queuing to vote at the Marawi Central Pilot Elementary School, a temporary facility designated as a polling center at a temporary housing site called Biyaya ng Pagbabago in Sagonsongan.

Polling centers for 22 of the 24 villages of the war’s ground zero had been set up there.

The presence of soldiers and policemen near polling centers helped keep the peace, Sumalipao said.

The Joint Task Force Ranao, a group of government security agencies formed to fight terror, said election workers and men in uniform on election duty deserved to be congratulated.

“More importantly, this is the first time in Marawi City that not a single person was killed in relation to the elections,” said Col. Romeo Brawner Jr., deputy chief of the task force.

Sumalipao said, as expected, voter turnout was low because many residents were unable to return to vote.

“We all know that everyone had evacuated,” Sumalipao said.

He said although there were many residents who made sure they were able to vote, “there’s still many lacking.”

Officials estimated turnout to be 60-70 percent of some 50,893 registered voters.

Sumalipao said the government tried to provide vehicles to transport displaced residents back to Marawi to vote.

Hundreds of residents were still in evacuation sites outside the city. Some were staying with relatives in Iligan City, other towns in Lanao del Norte and areas in northern Mindanao.

But Sumalipao said one of the biggest reasons for the low turnout was the fact that candidates for village chairs in 50 out of 96 villages were running unopposed.

“We all know how intense the race for village chair is,” Sumalipao said.

Zia Adiong, member of the legislative assembly of the Autonomous Region in Muslim Mindanao and Marawi resident, said those who made the elections a success should be commended for their commitment to “serve and protect the will of the people.”

“I salute teachers who, despite tremendous pressure, were able to perform their duties ensuring that each vote is counted and protected,” said Adiong.

“This is dedication. This is commitment to serve the public,” he said.