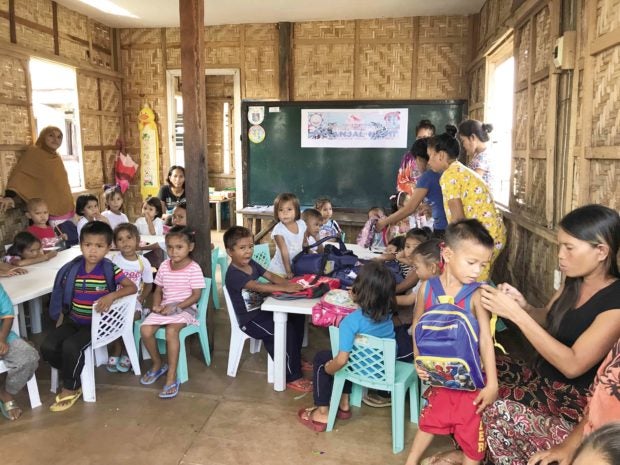 RECOVERING FROM TRAUMAA Badjao school at the temporary housing site in Buggoc. The number of students is growing with all the children considered as babies of the 2013 siege. —JULIE ALIPALA

ZAMBOANGA CITY — Just like any other resident of the city on Sept. 9 five years ago, Raymond Amil was going about his daily routine just minutes before the city was plunged into war.

Amil, a Badjao, was reviewing for the board exams for teachers in a “pelang,” a small fishing boat.

Members of Moro National Liberation Front (MNLF) had entered the city and set up camp.

Soon after, gunshots filled the air in Amil’s community of 10,000 Badjaos and elsewhere in the city.

Amil was weeks away from taking the board exams for teachers, a dream job.

His was among 10,000 Badjao families who fled when MNLF fighters refused to leave parts of the city that they occupied, prompting an armed response from the government.

Weeks of gunfights followed, displacing tens of thousands of residents and ushering in one of the country’s worst humanitarian disasters.

Badjao families were barred from seeking shelter at the Don Joaquin F. Enriquez Memorial Sports Complex, where most evacuees stayed.

So the seafaring people stayed along the coastline of RT Lim Boulevard (Cawa-Cawa Boulevard), one of the city’s main thoroughfares.

Amil’s family was among those who could not find space in the crowded street and were forced to sleep in their salvaged vinta, where Amil found himself browsing through his burnt notebooks, only weeks away from the teachers’ board exams.

He passed the exams that year.

“It feels like it just happened yesterday,” Amil said, who is now head teacher of the Badjao school, Bihing Tahik Primary School, where he takes care of more than 200 kindergarten children who were just babies during the MNLF siege.

“We were so terrified by all the gunshots, explosions and burning,” he said.

Badjaos, however, have the capability to swim above the tide.

They were just among some 26,000 families, or 120,000 individuals, who lost their homes when MNLF fighters invaded the city.

At least 10,000 homes were destroyed by fire lit by the 2013 fighting, according to the Bureau of Fire Protection (BFP).

The BFP said majority of the houses that were razed were not directly hit by gunfire, or shelling, like the structures that housed Badjaos in Rio Hondo, Mariki and Sumariki in the village of Talon-talon.

Some were burned when the military launched airstrikes on MNLF targets in the villages of Santa Catalina and Santa Barbara.

“We are used to extreme hardship and poverty and there is no reason why we cannot cope now,” Amil said.

“The government, despite limitations, tried its best to help us,” he added.

“They gave us food, shelter and hope,” said Amil, who is now living in a temporary housing site in Buggoc with his wife and baby girl.

But at least 264 families were still in evacuation sites.
“Some are now living normally, others are still struggling,” Rojas said.

She said some 75 percent of 6,481 housing units had been turned over to the local government by the National Housing Authority (NHA), although some of the sites were unfinished.

These included those in Hong Kong, Rio Hondo where a footbridge collapsed in April 26, sending politicians on an inspection trip plunging into murky waters.

Since some evacuees had already relocated to new housing units, the number of temporary housing sites in the city has been reduced from 12 in 2013 to only 5 now.

The Inquirer tried many times to call the NHA for verification, but its officials made themselves scarce following the footbridge collapse in Rio Hondo.

Mayor Maria Isabelle Salazar said almost 80 percent of housing units for the displaced had been completed.

“Our battle cry is build back a better Zamboanga City,” Salazar said.

She said the city needed to closely coordinate with the NHA, Department of Public Works and Highways and other national agencies to rehabilitate defective houses and structures and ensure that people recover from the effects of the siege.

The NHA, she said, promised to repair the collapsed footbridge and defective houses.

City officials, she added, were expected to be called anytime as principal complainants against MNLF.

“When the city was attacked in 2001, the MNLF was allowed to leave freely,” said Salazar.

“After years, they came back, fully armed and attacked the city,” she said.

She said the city government had set aside P2 million for the legal battle to pin MNLF down.