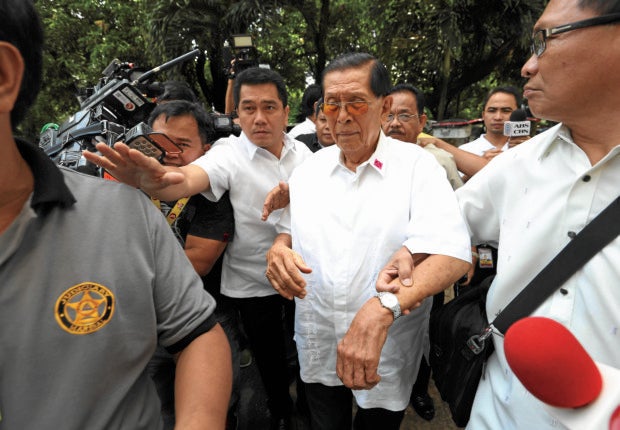 Gabriela Rep. Emmi de Jesus belied Enrile’s claim that no one was arrested for his or her political beliefs and for criticizing the late dictator Ferdinand Marcos during martial law.

De Jesus said she was arrested, detained and tortured in 1977 for merely putting Labor Day stickers on a jeepney.

“To say that no one was arrested for his or her political beliefs and for criticizing the late dictator Marcos is an outrageous lie. I myself was arrested in 1977 for merely putting Labor Day stickers on a jeepney. I was detained in a detention center in Bicutan and was subjected to extreme psychological torture,” she said in a statement.

The progressive lawmaker said even her husband was also arrested and tortured by the military.

“This Bongbong-Enrile tete-a-tete distorts the dark era that was Marcos’ martial law, and bastardizes the memory of those who fought the Marcos dictatorship. This is purely aimed at aiding the full political rehabilitation of the Marcoses,” she said.

De Jesus even dared Enrile to a debate.

Colmenares said thousands were arrested and tortured during martial law for their political beliefs and standing up against the dictator.

“I know that Enrile is lying through his teeth because I was an 18-year-old student then pushing for the establishment of a student council and paper when I was arrested and tortured,” he added.

In an interview published through Bongbong’s Facebook page Thursday, Enrile claimed that not one person was arrested because of political beliefs and for criticizing the late dictator during martial law.

He also said that there were no massacres committed during the time.

But Zarate said there were at least two massacres during the martial rule and they were both against Muslim communities in Mindanao.

He said the first was the Palimbang massacre or the Malisbong massacre in Palimbang, Sultan Kudarat on Sept. 24, 1974 where around 1,500 men were shot and the women and children were arrested.

The second massacre happened in Bingcul village in Mindanao on Nov. 12, 1977, where 42 villagers were killed by uniformed men, he added.

“Enrile and Marcos are trying to deodorize Martial rule and project it as a panacea for peace and prosperity. They are trying to drown out the growing awareness of the youth of today, the millennials who are now learning what really happened during Martial law,” Zarate said.

So we may never forget

September 1972: Recalling the last days and hours of democracy