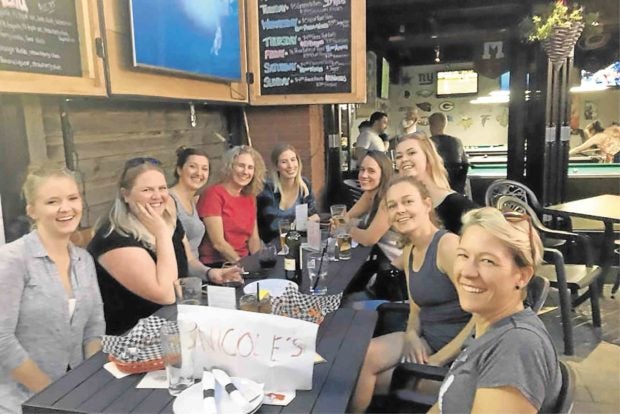 MEETING OF NICOLES After an e-mail blast by a Canadian student who is looking for a woman he knew only as Nicole, women with the same name meet up at a side street café in Calgary, Alberta, on Friday to arrange a meeting with him. —AFP

MONTREAL — Boy meets girl, girl gives boy wrong number: Some people might take it as a hint, but one Canadian student decided it was a challenge.

He e-mailed 246 women at the University of Calgary with the first name “Nicole” in search of the one he had met the night prior — causing many of the women on the mass e-mail chain to strike up a friendship.

The girl gang formed after Carlos Zetina met one Nicole on Thursday when the pair apparently hit it off — but Zetina only managed to snag her first name and a wrong number.

So he sent out an e-mail blast: “Met you last night and you gave me the wrong number,” he wrote in the subject line.

According to www.huffingtonpost.ca, he e-mailed all people in the University of Calgary’s directory whose name included some variation of the name “Nicole.”

Hundreds of Nicoles, Nicolettes and Nikkis ended up receiving his message, and the recipients included several professors, including the associate graduate dean of the kinesiology department.

But as a Dutch exchange student, the real Nicole does not have an e-mail address affiliated with the university in Canada’s Alberta province.

The other women, however, began a long thread and soon created a Facebook page they dubbed “Nicole From Last Night” to have a mass conversation sans Zetina.

“We created a Facebook page and we’ve been chatting that way,” said theater student Nicole Rathberger.

“It’s kind of neat that we’ve been using the technology to get to know each other,” she added.

Some 15 of the Nicoles met up at a bar near the university campus, and the “real Nicole” was finally made aware of the situation through a friend late Friday.

She is expected to attend the next meeting of the Nicoles, along with a least 25 more women.

Zetina finally received word from the object of his affection via text message.

The two plan to get coffee next week, Rathberger told Agence France-Presse (AFP), a date to which the other Nicoles have not been invited.