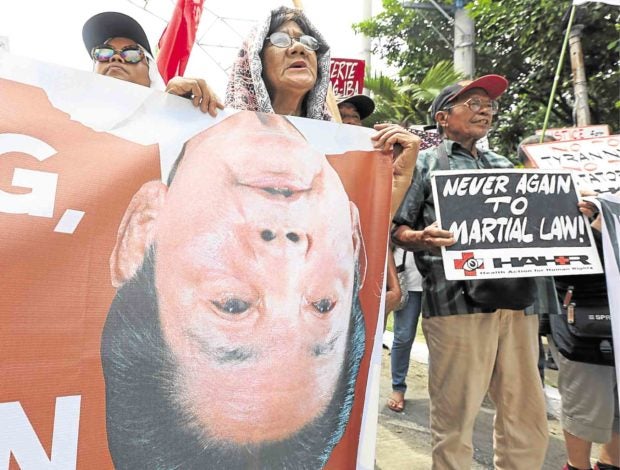 Dozens descended on his resting place at Libingan ng mga Bayani in Taguig City, bearing not flowers and well-wishes but scathing placards and righteous indignation.

Hundreds of kilometers to the north, the mood in Ilocos Norte province was solemn and quiet, unlike the lavish celebration by Ilocanos on the 100th birthday of Marcos last year.

Because it was not a special holiday, most residents went about their daily routines.

But on Tuesday, a simple thanksgiving Mass and wreath-laying ceremony were held separately in Sarrat and Batac City, where Marcos’ eldest daughter, Ilocos Norte Gov. Imee Marcos, watched as the police rendered a 21-gun salute at the Marcos monument in front of the family ancestral house.

At Libingan ng mga Bayani, protesters used the strongman’s birthday as a springboard to rage at his family’s brewing political comeback and President Duterte’s support for them—an alleged “deal with the devils,” said the Campaign Against the Return of the Marcoses and Martial Law (Carmma).

The protest played out at the gates of the cemetery as members of the Marcos family, including former first lady Imelda Marcos and former Sen. Ferdinand “Bongbong” Marcos Jr., held a private Mass inside.

It might have been Marcos’ birthday, but activists like former Social Welfare Secretary Judy Taguiwalo, Bayan Muna president Satur Ocampo and former Bayan Muna Rep. Teddy Casiño had some requests of their own from the ousted first family.

“We will not move on until they let go of their illusions of returning to power with the help of Rodrigo Duterte,” Casiño said, referencing Imee’s widely criticized remark that martial law critics should “move on.”

“We will not move on until the Marcoses, and everyone else responsible for that dark chapter in our nation’s history, is punished,” Casiño added. “It’s hard to move on when the current President of the Philippines idolizes Marcos.”

Taguiwalo drew parallels between today’s “skyrocketing prices of goods” and “record-breaking inflation” and the worsening conditions during Marcos’ rule that made the political environment ripe for his overthrow.

Soldiers of the Armed Forces of the Philippines decked out in riot gear blocked the entrance to the cemetery during the protest action.

Demonstrators carried makeshift tombstones that bore the “Never Again” slogan, paired with images of the late dictator and several of his “white elephants,” or grand but ultimately unused infrastructure projects, like the Bataan Nuclear Power Plant.

In Ilocos Norte, officials and employees from various towns offered red and white flowers and sang songs popularized during martial law declared by the dictator 46 years ago.

The state-run Mariano Marcos State University and the Philippine Rice Research Institute in Laoag City showcased paddy art featuring the image of Marcos as tribute to his contribution to agriculture.