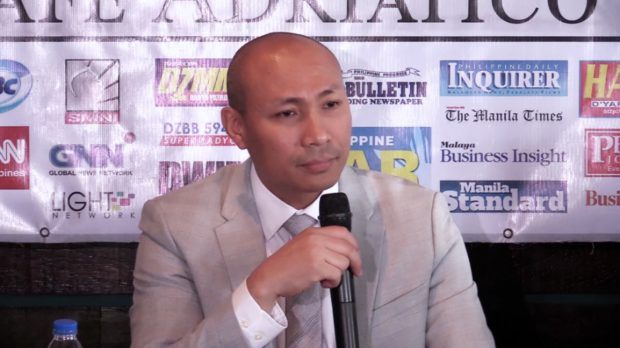 Magdalo Rep. Gary Alejano speaks in a forum on September 5, 2018 amid the furor surrounding the revocation of amnesty granted to Senator Antonio Trillanes IV’s by the Aquino administration. PHOTO by Ryan Leagogo/INQUIRER.net

Magdalo Rep. Gary Alejano is poised to file a resolution calling for an investigation into the “flawed” documentation and record-keeping system of the government, especially of the Department of National Defense (DND).

The opposition lawmaker would make such move as he noted how the unavailable copy of Senator Antonio Trillanes IV’s amnesty application had become the basis of President Rodrigo Duterte’s Proclamation No, 572, which revoked amnesty of his fiercest critic.

This, he added, is “a laughable basis for an issue with this gravity” especially since there were documents and videos showing that the senator filed an application for amnesty.

The lawmaker also pointed out that losing important government documents could be considered a crime under Article 226 of the Revised Penal Code, and Section 40 of Republic Act 9470 or the National Archives of the Philippines Act.

“The documentation and record-keeping system of the government must be looked into especially the offices which handle documents of high importance. I intend to file a resolution calling for an inquiry on this, specifically the case of DND,” he added.

Mr. Duterte’s directive issued on August 31 cited Trillanes’ failure to file an application for amnesty and admit his guilt over his involvement in the 2003 Oakwood mutiny and 2007 Manila Peninsula siege as grounds for the repeal of the senator’s reprieve.

Proclamation No. 572 stated that their grounds were based on a certification issued by Lt. Col. Thea Joan Andrade which says “there is no copy of his application for amnesty in the records.”  /kga