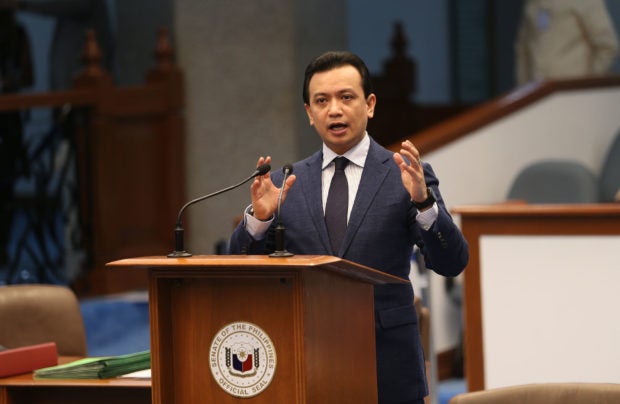 President Rodrigo Duterte has ordered the arrest of his critic, Senator Antonio Trillanes IV, after revoking his amnesty on the grounds that the former Navy officer who staged a mutiny 15 years ago had not applied for amnesty.

In Proclamation No. 572 dated August 31 but first made public through its publication in a broadsheet on Tuesday, Mr. Duterte also said Trillanes had not admitted his guilt.

The absence of an application and admission of guilt makes the amnesty granted to the senator in 2011 void from the start, the President said.

He directed the Department of Justice (DOJ) and the Armed Forces of the Philippines to pursue all criminal and administrative cases against Trillanes in relation to the Oakwood mutiny in 2003 and the siege of The Peninsula Manila in 2007. Both took place in Makati City.

The President also tasked the Philippine National Police (PNP) and the AFP with arresting Trillanes to stand trial for his alleged crimes.

“The past finally caught up with Senator Trillanes,” Presidential Spokesperson Harry Roque said Tuesday in Israel, where Mr. Duterte is on an official visit.

In the proclamation, the President said the former putsch leader did not file an Official Amnesty Application Form, as attested to by an August 30 certification from Lt. Col. Thea Joan Andrade, chief of the discipline, law and order division of the Office of the Deputy Chief of Staff of Personnel.

When Proclamation No. 75 granting amnesty to Trillanes and several other mutineers was issued, he was facing trial before the military tribunal. He was also under trial for a coup d’etat case in the Makati Regional Trial Court (RTC).

Justice Secretary Menardo Guevarra on Tuesday said that reviewing the validity of an amnesty proclamation could be done at any time.

The President’s order to arrest Trillanes, Guevarra explained, stemmed from the court martial proceedings that were aborted when the amnesty was supposedly granted.

He said the review of the amnesty granted to Trillanes was discussed as far back as 2013 by the Office of the Solicitor General (OSG) and Malacañang lawyers.

In the wake of the President’s order, the military will reconvene a general court martial for Trillanes.

AFP spokesperson Col. Edgard Arevalo said the revocation of the amnesty would bring Trillanes back to his former status as military officer with the rank of Navy lieutenant.

Being reverted to active military service also meant that the senator would have to be taken into military custody, Arevalo said.

Arevalo said it was the OSG that queried about Trillanes’ application for amnesty with the AFP office of the deputy chief of staff for personnel, the records custodian.

“There was no available record on file,” he said.

Arevalo said the document was not missing but was just “not found at the time” of the Solicitor General’s inquiry.

The DOJ on Tuesday filed a motion at the Makati RTC asking for the issuance of an alias warrant of arrest and hold departure order against Trillanes.

Guevarra said the senator could not invoke his legislative immunity as the offense was penalized by more than six years.

Judge Andres Soriano of the Makati RTC Branch 148 said he received the DOJ’s “very urgent” ex-parte omnibus motion for the court to issue a warrant of arrest and a hold departure order against Trillanes at 3:15 p.m. on Tuesday.

“I still have to review the records,” Soriano said, noting that Trillanes’ case involved 53 volumes of court documents.

Soriano said the coup d’etat case against Trillanes was dismissed in 2011, by then Judge Ma. Rita Sarabia, after the retirement of Judge Oscar Pimentel. —WITH REPORTS FROM CHRISTINE O. AVENDAÑO AND JAYMEE T. GAMIL

READ: WHAT WENT BEFORE: Oakwood Mutiny and Trillanes’ 2nd try to oust Arroyo