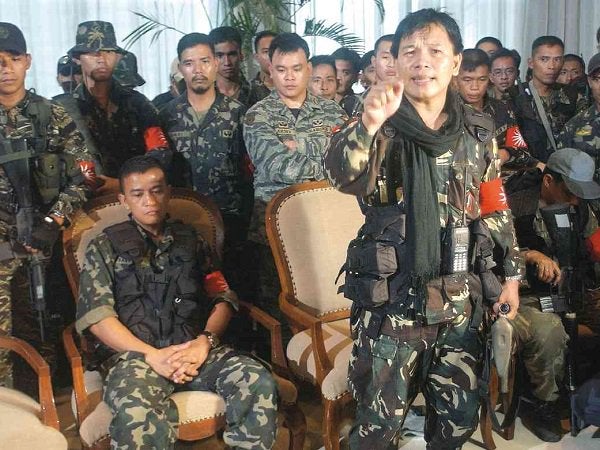 (Reposting these sidebars on the Oakwood Mutiny and Trillanes’ 2nd try to oust Arroyo which were originally posted on July 27, 2013 and November 12, 2014, respectively.)

Early on July 27, 2003, some 300 soldiers took over the Oakwood Premiere serviced apartments in Ayala Center, Makati City, to demand the resignation of certain officials and air their grievances against the military establishment.

Calling themselves the Magdalo group, the soldiers railed against alleged anomalies in the Armed Forces of the Philippines  Retirement and Separation Benefits System, the military procurement system (including the purchase of substandard equipment for soldiers) and the construction and repair of various facilities at Marine Base, Cavite, as well as the alleged transfer of arms and ammunition to unauthorized parties.

They also called for the resignation of then President Gloria Macapagal-Arroyo, then Defense Secretary Angelo Reyes, then Philippine National Police Director Gen.  Hermogenes Ebdane, and Victor Corpus, then chief of the AFP Intelligence Service.

The soldiers occupied Oakwood for at least 20 hours before emerging from negotiations with the government and ending their mutiny. They were later charged with coup d’etat.

In its report issued in October 2003, the Feliciano Commission said the mutiny was a “well-planned” power grab, and not a spontaneous protest.

Quoting facts it had gathered, the commission said the soldiers plotted to take over the government and establish a 15-member council, but that the plot was discovered, leading to an arrest order by then President Arroyo on the evening of July 26.

The report warned that the AFP “could implode and collapse with unpredictable consequences” if the issues were not addressed.

Trillanes ran for senator in 2007 as a guest candidate under the Genuine Opposition ticket (which was, incidentally, not registered with the Commission on Elections) and won while in detention. He was released in December 2010 after more than seven years in detention, following President Aquino’s issuance of Proclamation Order No. 75.  The order granted amnesty to those who joined the 2003 Oakwood mutiny, the 2006 failed coup and Marine standoff, and the 2007 Peninsula hotel siege. In January 2011, Trillanes led 94 other former junior military officers and enlisted personnel in retaking their oath of allegiance to seal the amnesty granted them.

Trillanes ran for a second term in the May 2013 elections and won, garnering more than 13.9 million votes.

In May 2008, Gambala and Maestrecampo were among the nine former Magdalo rebel officers who were pardoned by President Arroyo and freed after nearly five years in detention, following their admission of guilt. They were discharged from military service by a military tribunal after pleading guilty to violating the Articles of War.

Layug ran for congressman in the second district of Taguig City in the 2010 elections but lost.

The party-list Magdalo Para sa Pilipino, composed of former mutineers, won in the 2013 elections with its representatives Alejano and Francisco Ashley Acedillo.

In March this year, former Army officers First Lieutenants Lawrence San Juan and Rex Bolo were sentenced to long prison terms after spurning President Aquino’s offer of pardon. They were found “guilty as participants of the coup,” and were ordered to serve a maximum of 12 years in jail by Makati Regional Trial Court Branch 148 Judge Andres Soriano. Inquirer Research/ac

Antonio Trillanes IV, along with Brig. Gen. Danilo Lim and other Magdalo soldiers, walked out on Nov. 29, 2007, of their trial proceedings at the Makati Regional Trial Court for the 2003 Oakwood mutiny and proceeded to the Manila Peninsula Hotel.

It was the second attempt of Trillanes, a former Navy officer, to overthrow the administration of then President Gloria Macapagal-Arroyo.

Trillanes surrendered after seven hours. He was subsequently charged with rebellion and imprisoned.

However, Marine Capt. Nicanor Faeldon and three other Magdalo soldiers involved in the failed revolt managed to escape from the five-star hotel just before police stormed it and arrested Trillanes, Lim and company.

The Philippine National Police has identified one of the men as a Corporal Elmer Colon, an employee of the Makati City government. He was seen on TV with Trillanes and Lim wearing a black camouflage uniform and a wig.

In response, then Makati Mayor Jejomar Binay ordered an inquiry into the purported participation of City Hall employees in the failed revolt.

The mayor wrote a letter to then PNP Director General Avelino Razon in which he said one Elmer Colon was indeed employed as a “job order security guard.”

“Colon did not report for work on Nov. 29 and was later seen at the Manila Peninsula,” Binay said.

He also cited reports that other City Hall employees were at the Peninsula during the Magdalo takeover.

“I have ordered our human resources development officers to go over the list of individuals arrested by the police and who are detained at Camp Crame,” Binay said.

In February 2010, Judge Elmo Alameda of Makati RTC Branch 150 granted Trillanes, Lim and the arrested Magdalo soldiers P200,000 bail in connection with the rebellion charge. But they remained in detention pending resolution of the coup d’etat charge for the Oakwood mutiny.

Faeldon surrendered to the military in July 2010.

While in prison, Trillanes ran for senator on the opposition ticket in 2007 and won.

In September 2010, 17 senators, including then Senate President Juan Ponce Enrile and Sen. Gregorio Honasan II, signed Senate Resolution No. 217 urging President Aquino to grant amnesty to Trillanes and other soldiers jailed for involvement in failed uprisings against the Arroyo administration.

Under the terms of the amnesty, rebel soldiers had to admit that their participation in the July 2003 Oakwood mutiny, the February 2006 Marine standoff and the November 2007 Manila Peninsula siege was in violation of the Constitution, the Revised Penal Code and the military’s Articles of War.

In January 2011, Trillanes formally applied for amnesty and the Department of National Defense approved his application along with 37 other former officers charged in the three military uprisings.

Lim and Faeldon were granted amnesty the same year.–Inquirer Research/ac