'Facial cream' turns out to be shabu | Inquirer News

‘Facial cream’ turns out to be shabu 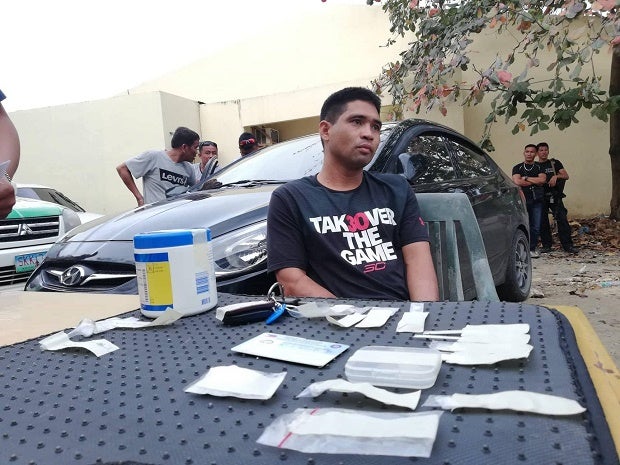 Vincent Homer Maca Bitancor was caught trying to sneak into the Tagbilaran jail a cannister (left, middle) which supposedly contained facial cream but turned out to be suspected drugs. Other items seized from Bitancor are laid out on a table in front of him. INQUIRER PHOTO / LEO UDTOHAN

TAGBILARAN CITY – A man was arrested after allegedly trying to sneak illegal drugs into the lock-up jail of the Tagbilaran City Police Station.

Police said Vincent Homer Maca Bitancor, 34, of Barangay Tabajan in Guindulman town, tried to bring into the jail a container supposedly filled with “facial moisturizer cream” at about 4:30 p.m. last Tuesday. He was to visit his friend, Ulysses Sale, who was facing illegal drug charges.

The jailer noticed something unusual with the container and asked Bitancor to open it.

A small sachet of suspected shabu and a tooter, a drug paraphernalia, were found inside.

Bitancor ran outside and got into his car, but police were able to corner him.

In his hurry to escape, he hit another car parked outside the station.

When policed searched his car, they were able to seized nine more sachets of suspected shabu.

Bitancor said he just rented the car from a friend. He also said that he had no knowledge of the drugs inside the facial moisturizer cream container.

“If I knew about it beforehand, I would not have done it,” he told Inquirer.

Police said Bitancor was a new player in the illegal drug trade in the province.

He was detained at the Tagbilaran City Police station jail while facing charges for violating the Dangerous Drugs Act. /cbb