Alejano, Belmonte: Trillanes ‘singled out’ by admin in amnesty revocation 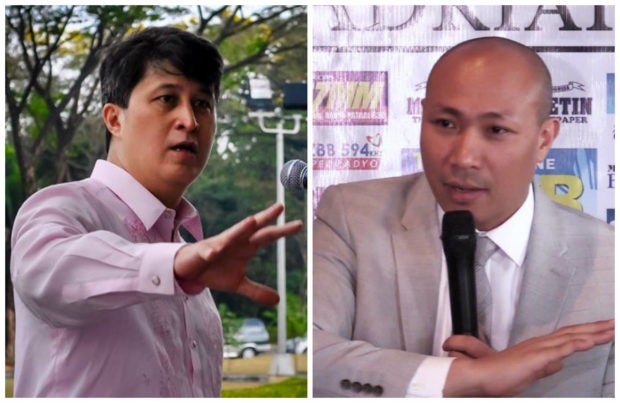 Two lawmakers have raised concern on how staunch Duterte critic, Senator Antonio Trillanes IV, appeared to have been singled out by the administration when it moved to revoke the senator’s amnesty.

The legislators cited duly processed and approved amnesty documents of the senator, and warned that the administration’s move against Trillanes may “open floodgates to harassment of other grantees.”

Two documents obtained by INQUIRER.net showed that Trillanes had applied for an amnesty and the Department of National Defense (DND) processed and approved it contrary to what President Rodrigo Duterte had claimed in his order.

Duterte earlier ordered the arrest of the opposition senator, claiming that the former Navy officer who staged mutinies in 2003 and 2007 against then President and now Speaker Gloria Macapagal-Arroyo had not applied for amnesty and had not admitted his guilt.

“What it (documents) proves is that Sen. Trillanes’ application for amnesty was processed and approved. It raises concern about how Sen. Trillanes was singled out,” Belmonte told INQUIRER.net.

Alejano also told INQUIRER.net: “He (Trillanes) is being singled out. It’s very clear.”

It was stated in DND’s Ad Hoc Committee Resolution No. 2 and a memorandum dated May 23, 2011, both signed by then Defense Secretary  Voltaire Gazmin, that Trillanes applied for the amnesty which was later granted.

“Upon the expiration of the 90-day period of the submission of amnesty applications, the following AFP personnel have been granted amnesty pursuant to Presidential Proclamation  Nr. 75 effective on the dates respectively indicated opposite their names, in connection with their involvement/participation in the 2003 Oakwood Mutiny, the 2006 Philippine Marines Standoff and the Manila Peninsula Hotel incident,” the document reads.

Aside from Trillanes, Alejano was also included in the list.

‘Opens floodgates to harassment of other grantees’

In his privilege speech during the House of Representatives’ Wednesday session, Belmonte pointed out that allowing Duterte’s proclamation to take effect would “open the floodgates… to harassment of other grantees, not only of the Aquino amnesty, but even the other amnesties issued by the government.”

Belmonte stood as the legal counsel for the then Magdalo soldiers. He was also among four other civilians whose applications for amnesty were approved by former President Benigno Aquino III.

“The same thing could happen to all of us who availed of the amnesty,” he added.

But Belmonte questioned why there weren’t any review happening to other grantees especially those who refused amnesty but benefitted from the dismissal of the cases back then.

“Then what about those involved during those times who refused amnesty, pero nakinabang sila by virtue of the dismissal of all cases? Then Major Jason Aquino, our current NFA (National Food Authority) Administrator comes to mind,” he said.

“Unlike Senator Trillanes, wala silang admissions at all, pero nakinabang sila. I know of other in positions of responsibility – in the CAAP, in the DND, in PDEA, Customs and other government agencies and private sector corporations. Also, there are those who were lucky enough not to be prosecuted at all. I see them all over the place, even holding prominent positions even in Malacañang,” he added.

Armed Forces of the Philippines (AFP) Spokesperson Col. Edgard Arevalo had confirmed that an inquiry from Calida had prompted the review of the amnesty given to Trillanes IV.

“As Solicitor General, you continue to enrich our jurisprudence. Kung may basketball team ang Office of the Solicitor General, maganda siguro ipangalan ninyo ng The Quo Warranto’s. It seems that Senator Trillanes’ amnesty revocation is another application of the same theory,” he said.

“Proclamation 572 is clearly another tool of political persecution. And this holds true regardless of how we may feel about Sen. Trillanes, of how we may disagree with his stance, his positions, or his principles. The fact remains that Proclamation No. 572 finds no basis in fact or in law,” he said.