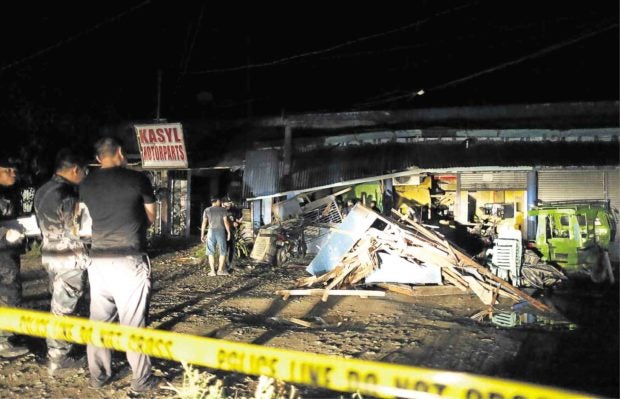 ‘DASTARDLY ATTACK’ Authorities check the extent of damage left by Sunday night’s explosion inside an internet café in Isulan town, Sultan Kudarat province, the second such attack in less than a week that killed two and injured several others. —JEOFFREY MAITEM

ISULAN, SULTAN KUDARAT—The military on Monday blamed Sunday night’s bombing here that killed two people and wounded 12 others on a faction of the Bangsamoro Islamic Freedom Fighters (BIFF) that had pledged allegiance to the Islamic State (IS) jihadi group in the Middle East.

Malacañang condemned the “dastardly attack,” the second in Isulan since August 28, when a bomb ripped through a row of used-clothes stores at Barangay Kalawag 3, killing three people and injuring 36 others.

“We strongly denounce the latest attack in Isulan, Sultan Kudarat,” presidential spokesperson Harry Roque said in a statement issued in Jerusalem, where President Duterte was on a four-day official visit.

The August 28 bombing in Isulan was also blamed on the BIFF faction led by Abu Toraife.

The police chief of Isulan, Supt. Celestino Danie, and the provincial police director, Senior Supt. Noel Kinazo, were sacked on Monday after the latest explosion.

The death toll in Sunday night’s attack rose to two after the sister of the 18-year-old boy who was killed in the explosion that ripped through an internet café at Barangay Kalawag 2 died on Monday morning.

Maria Lyn Luda, a cousin of Jan Mark Palencia Luda (not Lupa as earlier reported), died at the Sultan Kudarat provincial hospital, according to Supt. Aldrin Gonzales, spokesperson for the Police Regional Office 12.

Isulan Mayor Marites Pallasigue called off classes at all levels in public and private schools as a security measure.

No one has claimed responsibility for Sunday night’s bombing, but Capt. Arvin John Encinas, spokesperson for the military in the region, said followers of Abu Toraife, leader of the BIFF faction that had pledged loyalty to IS, carried out the attack in retaliation against the military for air and ground operations in Maguindanao province that killed several fighters from the group.

“They are losing men . . . that’s why they are resorting to bomb [attacks]. It’s part of their retaliation and to divert our concentration [from] them,” Encinas said.

“Last night, we locked down the town as we hunted the perpetrators,” he added.

Dave Bryan Leliza, 26, caretaker of the internet café, said on Monday that a male teenager carrying a paper bag arrived at 7:15 p.m. on Sunday and occupied cubicle No. 8.

Leliza said the boy left after 10 minutes, and a man took the same cubicle.

“Our [security cameras] recorded all these . . . [A camera] clearly showed the face of the [teenager who came in carrying a paper] bag,” he said, adding there were 15 customers at the time.

“Our [computers] were flying, the ceiling falling, smoke billowing and everyone inside crying for help,” Leliza said.

“I tried to help but realized I was hit in the legs and head,” he said.

Leliza was one of the victims rushed to various hospitals. Doctors extracted fragments of floor tiles from his head and nails from his legs.

Two of the victims, including Leliza, remained in critical condition at the hospital.

Cardinal Orlando Quevedo, the archbishop of Cotabato, on Monday expressed outrage at the attack and called on Church followers “to pray for the victims and for their families.”

Quevedo urged the military, the Moro Islamic Liberation Front and the Moro National Liberation Front, both of which have signed peace agreements with the government, to flush out the perpetrators and bring them to justice.

The United Kingdom and Australia on Monday renewed their warnings to their citizens against traveling to western and central Mindanao and the Sulu archipelago because of terrorist activities and clashes between the military and insurgent groups.

The British advisory included warning of a possible terrorist attack in Manila. —WITH REPORTS FROM JULIE M. AURELIO AND TINA G. SANTOS IN MANILA AND BONG SARMIENTO IN KORONADAL CITY