Laoag folk seek help to save Spanish-era bridge from roadwork 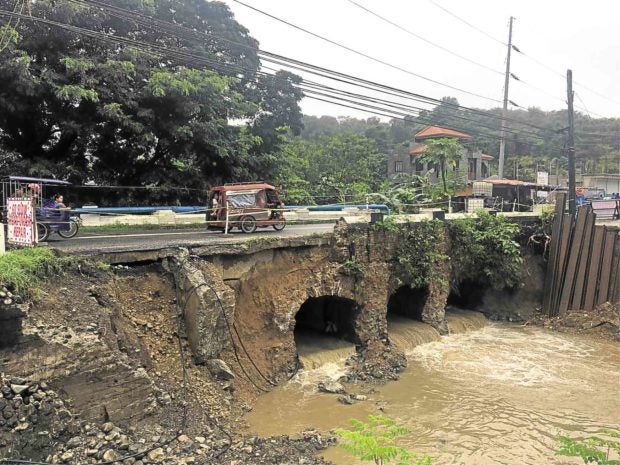 Erosions can be seen at a government work site on the Spanish-era Barit Bridge. —LEILANI ADRIANO

LAOAG CITY — A bridge dating back to the Spanish colonial era is being threatened by a government road project and must be preserved, heritage advocates said here.

The Puente de Barit at Barangay Barit is among the heritage structures in the province, according to Fr. Ericson Josue of the Diocese of Laoag.

A historian, Josue said three other bridges designed with the same three arches had been built in the villages of Tupec, Bulangon and San Mateo.

He said the bridges mightbe as old as the Spanish churches in Ilocos Norte province that were built before 1888.

But, just like some surviving colonial bridges in Ilocos Norte, Barit Bridge had not been the subject of extensive conservation efforts, he said.

On Friday, social media reported that workers undertaking a road widening project there tried to demolish the approaches of the bridge.

A post said in Ilocano: “This is a grave violation of heritage, this bridge is the last among the most intact Filipino-Hispanic bridges in Ilocos Norte.”

“[Public Works] Secretary Mark Villar has already ordered the Department of Public Works and Highways (DPWH) in the first district of Ilocos Norte to stop the demolition of the bridge or any part of it,” said Aianree Raquel, Ilocos Norte tourism officer.

In another post, Ilocos Norte Rep. Rodolfo Fariñas, who hails from Barangay Barit, said he had also intervened.

“As early as the other week when I saw the barricades due to the impending construction work on the bridge, I asked the district engineer to stop the construction [for] the meantime until they show me the complete plans,” Fariñas said.

“We have been assured by our top cultural agencies that they will send experts to assess the damage done and determine actions to be taken,” Raquel said.

Bernard Joseph Guerrero, a heritage advocate based in Paoay town, said the bridge fell under the coverage of Republic Act No. 10066 (National Cultural Heritage Act) that protects structures of historic importance which are 50 years old and older.

“Where historic importance is presumed by default [as in Barit Bridge], the local government will be liable for its unwarranted destruction,” he said.

Guerrero said a DPWH circular had barred the demolition of “historically important structures,” and urged the “local cultural council and the building officer to negotiate the terms of road widening on the Barit Bridge and its landings.”

A new bridge “does not justify the destruction of one that carries and symbolizes memories of the city and its town folk, as well as its history for over 200 years,” he added.