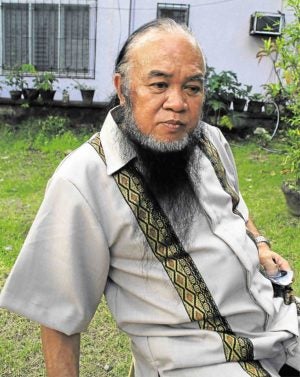 COTABATO CITY — A Catholic priest held hostage for months by Islamic State (IS) followers in Marawi City last year expressed support for the ratification in a plebiscite of the Bangsamoro Organic Law (BOL), saying it could finally bring peace to
Mindanao.

Fr. Teresito “Chito” Soganub said he was optimistic that the BOL could help bring a peaceful end to Moro rebellion rooted in the fight for territory and injustices committed against the Moro people in the past.

Soganub celebrated Mass on Friday at the Immaculate Concepcion Cathedral where he was baptized more than 57 years ago.

Asked for his opinion on the BOL, Soganub said he was glad the Duterte administration pushed it to become law.

“I am optimistic the law will correct the historical injustices our sister and brother Muslims have been longing for,” he said.

“We should all support it,” said Suganob, who had been working in Marawi, a predominantly Muslim city, for more than 22 years.

“The new law recognizes our brothers’ and sisters’ right to self-determination,” he said.

Soganub remained under treatment for post-traumatic depression following his captivity by members of Abu Sayyaf and Maute who tried to turn Marawi into an IS base.

“I am still undergoing extraordinary psychiatric and psychological healing because of my extraordinary experience in Marawi,” he said.

He and other Catholic Church workers were taken hostage by Maute and Abu Sayyaf members from May 23 until his escape on Sept. 16 last year.

When he speaks about his 117-day ordeal as a captive, Soganub would always shed tears and, at one point, during his captivity, had asked, “God, why me?”

Now, without a parish to attend to, he said he had been keeping himself busy by accepting speaking engagements about his ordeal and how he managed to survive a very difficult mission.

He told Inquirer in October last year that he took the assignment in Marawi because “no other priest dared to be assigned there.”