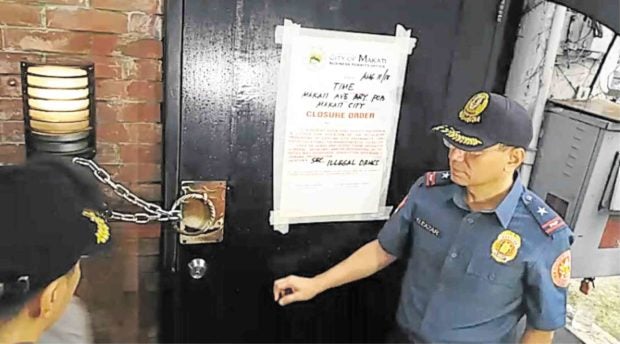 CLOSED FOR BUSINESS The Makati City government has shut down the bar following the raid. —NCRPO photo

The 120 patrons of a bar in Makati City that was raided by the police on Saturday have been charged with “visiting a drug den.”

The case against the customers, 57 of them foreigners, was just one of several filed on Sunday in the city prosecutor’s office in connection with the raid on Time in Manila, a bar located at the popular party hub of Barangay Poblacion.

They were accused of violating Section 7 (employees of a drug den) of Republic Act 9165 or the Dangerous Drugs Act.

Additional charges of violating Sections 5 (drug pushing), 6 (maintenance of a drug den) and 11 (drug possession) of R.A. 9165 were filed against Regino while Burton Joseph Server, the bar owner, was slapped with violating Section 6.

Sever, however, remains at large, according to the Makati police’s Station Drug Enforcement Unit (SDEU).

According to the SDEU progress report on the buy-bust operation which was conducted at 4:30 a.m. on Saturday, evidence was found that all 31 employees, “in one way or another,” conspired and colluded with the bar manager to make drugs readily available in the establishment.

Asked whether the police believed that all 120 patrons knew of the bar’s darker side, Chief Supt. Guillermo Eleazar, National Capital Region Police Office director, told the Inquirer that the cases were simply filed in adherence to regular procedures.

It was up to the prosecutor to determine whether there was probable cause to pursue the case against the customers, Eleazar said. He added that in the meantime, they would not be arrested and the charge against them was bailable.

According to the SDEU report, the police found 19 pieces of ecstasy, 18 plastic sachets of cocaine and one sachet containing kush (high grade marijuana) during the raid.

While some of the drugs were allegedly seized from the five employees, others were found on top of chairs and tables.