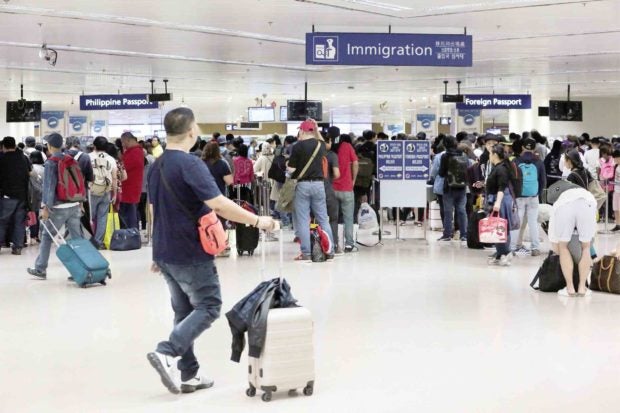 STRICTER SCREENING Immigration officials have tightened the screening of departing Filipino workers to stop the trafficking of minors. —Grig Montegrande

Since June, a total of 114 girls below 21 years old have been turned away by airport officials, according to Marc Red Mariñas, acting immigration deputy commissioner and Port Operations Division chief.

He said that in June alone, 67 people who confessed to being minors were barred from leaving the country.

Mariñas said that all of the apprehended passengers presented passports showing that they were adults. They also had valid overseas employment permits, working visas and job contracts.

“It is evident that these young women were victimized by syndicates that specialize in the procurement of documents to make it appear that they are old enough to work abroad,” he added.

Last month, the Manila Police District rescued more than 40 women, some of them minors, during a raid in Sta. Cruz, Manila. They were illegally recruited from Mindanao and offered work as household service workers in Saudi Arabia.

A report from the BI-Naia Travel Control and Enforcement Unit showed that the latest apprehensions involved four girls who were intercepted on Aug. 2 while trying to leave on a Saudia Airlines flight for Riyadh, Saudi Arabia.

The passengers allegedly admitted during investigation that they were below 21 years old although their passports indicated that they were in their late 20s.

They were later turned over to the Inter-Agency Council Against Trafficking.