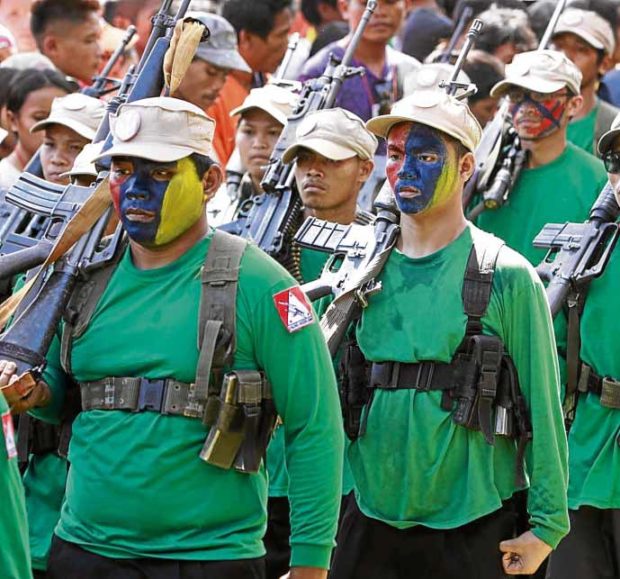 SHOW OF FORCE New People’s Army guerrillas have their faces painted to hide their identities during the celebration of the 42nd anniversary of the Communist Party of the Philippines last December on Mt. Diwata. The guerrillas, who have been fighting a rebellion rooted in agrarian unrest for decades, have been declared terrorists by President Duterte. —AP

The Department of Justice (DOJ) did not conduct an independent verification of the supposed connection of some 600 people with the Communist Party of the Philippines (CPP) who had been tagged as terrorists, Justice Secretary Menardo Guevarra admitted on Monday.

Defending his department’s proposed P21.3-billion budget for 2019, Guevarra told the House appropriations committee that DOJ prosecutors did not do their own vetting of the individuals named in a petition that the government filed seeking to declare as terror organizations the CPP and its armed wing, the New People’s Army (NPA),

Under questioning by Bayan Muna Rep. Carlos Zarate, the justice secretary said the inclusion of the individuals, most of them identified with militant groups, on the terror list was intended to satisfy the procedural requirement of filing the petition.

“The DOJ itself did not have personal verification regarding the connection of these individuals with the CPP and NPA,” Guevarra said at the budget hearing.

“The petition was based on the information supplied solely to the department by the intelligence agencies of the government,” he added.

Zarate urged Guevarra to be more careful and exercise prudence in linking private individuals to underground groups since such accusations may put their lives at risk.

“You cannot just wash your hands off because the petition you filed in the court endangered the lives of these people,” the lawmaker told the justice secretary.

“You should be prudent and more circumspect. We know that in the Philippines, if you are tagged, you can be an open target not just for prosecution, but also for physical attacks,” he added.

According to Guevarra, the names of Corpuz, Ocampo and others were mentioned in the petition to “give due notice” to the CPP and NPA as actual respondents in the petition, which the DOJ filed in the Manila Regional Trial Court Branch 19 on Feb. 21.

“They were included in the hope that they will file the necessary pleadings on behalf of the entities named in the petition,” he said.

Guevarra said it was up to the Nueva Ecija court to order the arrest of Ocampo, former Anakpawis Rep. Rafael Mariano, former Bayan Muna Rep. Teddy Casiño and ex-Gabriela Rep. Liza Maza, also the chair of the National Anti-Poverty Commission.

President Rodrigo Duterte declared the CPP-NPA terrorist organizations following the collapse of peace talks between the government and National Democratic Front of the Philippines, which represents all underground rebel groups.

To heed the President’s declaration, the DOJ filed a petition for the court to make formal the declaration of CPP, NPA and other underground groups with ties with communist rebels as terrorist organizations.

Read Next
National ID systems draws mixed reviews
EDITORS' PICK
UK’s Boris Johnson will resign, BBC reports
Unemployment rate up to 6% in May
Geek out at TOYCON 2022 powered by Smart Signature
High inflation: Your P1 is now worth only 87 centavos
High-risk pregnancy: Reducing your risk is in your hands
House energy committee chair Arroyo bats for cheap electricity
MOST READ
Suspect in grisly killing of missing woman in Bulacan arrested
Kim Atienza’s daughter flaunts bikini body in response to critics of her ‘revealing photos’
Japanese artist who created ‘Yu-Gi-Oh!’ found dead in the sea
FDA probes popular Filipino noodle brand for ‘high level of ethylene oxide’
Don't miss out on the latest news and information.