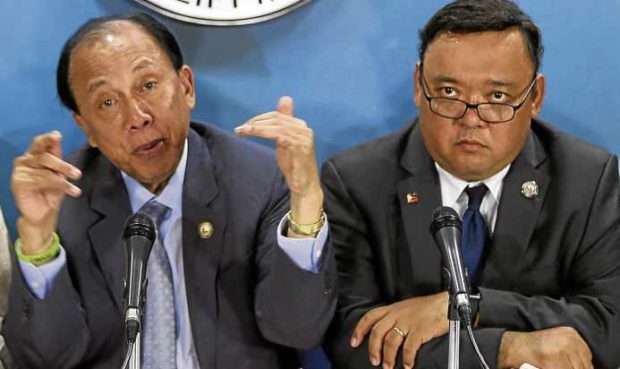 ALLIES Rep. Danilo Suarez, elected minority leader by members of the House majority, answers questions from reporters at a press conference with then Kabayan Rep. Harry Roque in May at the House. —EDWIN BACASMAS

It took just 20 seconds for President Rodrigo Duterte’s allies to end the two-week impasse in the leadership of the minority bloc in the House of Representatives.

But opposition lawmakers quickly challenged Suarez’s victory, with Marikina Rep. Miro Quimbo calling it “simply illegal, not in due course and a direct violation” of the Supreme Court’s ruling on the issue.

“What we witnessed today not only created a legal question, but in fact cemented it,” Quimbo told his colleagues.

“It is regrettable. Let our continuing objection be put on record,” said the lawmaker from the Liberal Party (LP), once the dominant force in the House under former President Benigno Aquino III, an LP stalwart.

Quimbo headed one of the three factions in the House that had been battling for the minority bloc, which is usually intended for opposition legislators.

According to De Vera, a group of lawmakers who did not support Arroyo had already voted to recognize him as minority leader.

Upon the motion of Majority Leader Rolando Andaya Jr., Deputy Speaker Fredenil Castro, acting as the presiding officer, opted not to hold individual voting of House members, but just by viva voce, or voice vote, during the chamber’s regular session.

Caloocan City Rep. Edgar Erice, also an LP member, reiterated that the majority lawmakers should not have been allowed to decide which faction should be recognized as the minority bloc.

He noted that Suarez did not only vote for Arroyo to help make the coup against Alvarez successful but had also actively campaigned to oust the former Speaker.

“For a legislation to be qualitative, a dedicated and responsible opposition or minority is necessary. Checks and balances is an integral part of legislation,” Erice said.

Quimbo said while the LP-led opposition lost the battle for the minority bloc, the fight was still far from over as his group would seek the high tribunal’s intervention.

“This is an act that amounts to an excess in discretion of the House. It already amounts to lack of jurisdiction,” he told reporters, adding that five more lawmakers would join his 25-member faction.