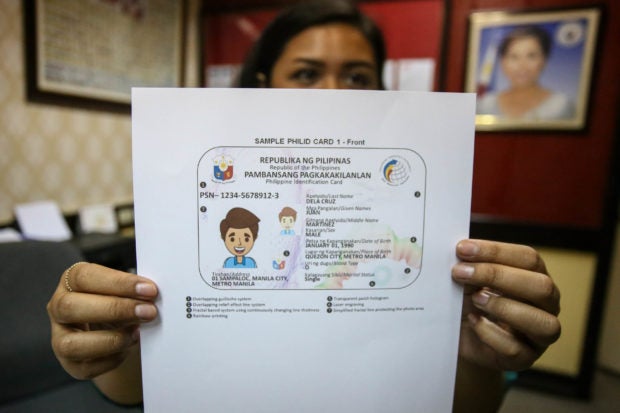 ID SAMPLE A Philippine Statistics Authority employee presents at the House a sample of the ID to be issued under the national ID system. —JAM STA. ROSA

The implementation of the national identification system has drawn mixed reactions from different sectors after it was signed into law by President Duterte in Malacañang on Monday.

Balanga Bishop Ruperto Santos, head of the Catholic Bishops’ Conference of the Philippines’ Episcopal Commission on the Pastoral Care of Migrants and Itinerant People, said the new system “would be especially beneficial to our overseas Filipino workers.”

“It can also protect them against bribery and red tape when dealing with different agencies,” Santos said.

Manila Auxiliary Bishop Broderick Pabillo told reporters, however, that he hoped the law would not be abused.

The Armed Forces of the Philippines described the national ID system as a bane to criminals and a boon to the law-abiding.

“We believe it will promote a peaceful and secure environment where terrorists, criminals and other unscrupulous individuals will have difficulty coping to pursue their evil designs and nefarious activities,” AFP spokesperson Col. Edgard Arevalo said in a statement on Tuesday.

“The law will further isolate criminals from law-abiding citizens,” he said.

The Philippine National Police also welcomed the enactment of the ID system, saying its benefits outweighed concerns over privacy.

In a statement, the PNP assured that the national ID system’s application to law enforcement and internal security operations was actually “quite limited,” to assuage fears of privacy breaches.

To complement the national ID system, the PNP hoped to make its National Crime Information System and police information system accessible to other government agencies in a “national database.”

But human rights group Karapatan on Tuesday sounded the alarm, saying this will lead to “wholesale violations of rights under the present administration.”

In a statement, Cristina Palabay, Karapatan secretary general, said PhilSys, or Republic Act No. 11055, gave the government license to violate people’s rights to freedom of movement and privacy and right to access to social services.

Computer Professionals’ Union, an organization of computer experts, also raised concern, saying the law “will act as a virtual tracker for holders of the ID card.”