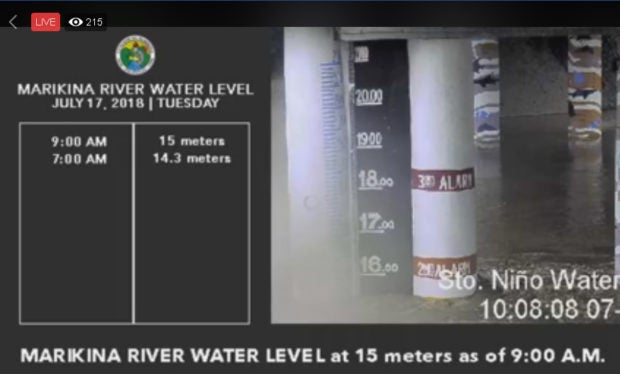 A live Facebook feed by the City of Marikina shows the water level of the Marikina River approaching 16 meters as of 10:08 a.m., July 17, 2018, due to continuous rain brought by the southwest monsoon or habagat. FACEBOOK SCREENGRAB

The first alarm has been raised at the Marikina River amid incessant rain brought by the southeast monsoon that is being enhanced by Tropical Depression “Henry,” the Marikina City government announced Tuesday morning.

Classes in all levels in the city for both public and private schools have also been suspended by Marikina City Mayor Marcy Teodoro due to heavy rain.

A live feed of the Marikina River water level is made available by the Marikina City government on Facebook. /cbb