An age without a shared reality 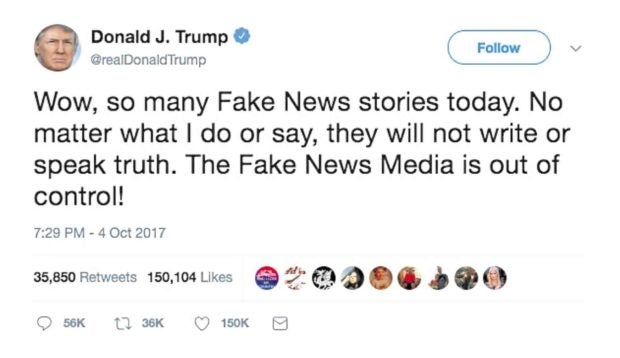 US President Donald Trump has popularized the term “fake news,” using it mainly as an accusation leveled at the media.

PARIS—False information is saturating political debate worldwide and undermining an already weak level of trust in the media and institutions, spreading further than ever on powerful social networks.

US President Donald Trump has popularized the term “fake news,” using it mainly as an accusation leveled at the media, and it is increasingly used by politicians from Spain to China, Myanmar or Russia.

“Fake news” has been generalized to mean anything from a mistake to a parody or a deliberate misinterpretation of facts.

At the same time, the proliferation of false online information is increasingly visible in attempts to manipulate elections, notoriously surrounding Trump’s 2016 victory.

Nearly two years after Trump’s shock win, debate is still raging on the impact of “fake news” on the presidential campaign.

The buildup saw numerous examples of hoaxes and false news stories—one about Hillary Clinton’s alleged links to a child sex ring, another about the Pope purportedly endorsing Trump—which were shared massively and some believe could have swung votes to tip Trump to victory.

Misinformation had “a significant impact” on voting decisions, according to Ohio State University researchers, who questioned voters about whether they believed certain false stories.

The researchers said it was impossible to prove that false information had changed the course of the election but noted it would have required a change in just 0.6 percent of voters, or 77,744 people, in three key states, to alter the electoral college outcome.

Since the election, Trump has denounced as “fake news” any information that displeases him while his aides have offered a mixture of truth and distortions, sometimes described as “alternative facts.”

This has hurt the credibility of the US news media and led some to describe the current period as a “post-truth era”—an age without a shared reality.

“The truth is no longer seen as important,” said John Huxford of Illinois State University, whose research focuses on false information, adding that “lies and fabrication even seem to bolster one’s reputation and political prowess among their core supporters.”

Some studies suggest that more people are willing to believe falsehoods as partisanship has risen. A 2017 survey, for example, showed that 51 percent of Republicans believed that Barack Obama was born in Kenya, despite the hoax being debunked dozens of times.

Many people reject accurate information which is “discomforting to their self-concept or worldview,” noted a study by professor Brendan Nyhan of Dartmouth College in the United States and Jason Reifler of the University of Exeter in the UK.

“Some misinformed individuals may already be at least tacitly aware of the correct information but (are) uncomfortable acknowledging it,” the study said.

In 2018, the average level of trust in the news, across 37 countries, remained relatively stable at 44 percent, according to a poll by YouGov for the Reuters Institute for the Study of Journalism.

But Reuters Institute research associate Nic Newman warned in text accompanying the report: “Our data show that consumer trust in news remains worryingly low in most countries, often linked to high levels of media polarization and the perception of undue political influence.”

This is exacerbated by the spread of false information by authority figures. In some countries this can go far.

For example in Ukraine, where authorities staged the death of Russian journalist Arkady Babchenko at the end of May. Kiev said the move was justified to foil a real plot to assassinate Babchenko.

The staging, broadcast in good faith by media worldwide, “is a godsend for paranoid people and conspiracy theorists. At a time when confidence in news is so low, a state playing with the truth in this way makes things even more complicated,” said Christophe Deloire, secretary general of journalism watchdog Reporters Without Borders.

Trust in traditional media remains higher than for social networks, according to the YouGov poll. Only 23 percent of those polled said they trusted the news they found on social media.

More than half (54 percent) agreed or strongly agreed that they were concerned about what is real and fake on the internet. “The very fact that so many people are circulating a piece of misinformation gives it credibility,” Huxford said.

A study released by the Massachusetts Institute of Technology in March found that false news spreads more rapidly on Twitter than real news does.

Many see Facebook as being the main vehicle for spreading false information in recent years.

The Cambridge Analytica public relations disaster, in which Facebook admitted that up to 87 million users may have had their data hijacked by the British consultancy firm, came on top of widespread criticism of the social network’s propensity to spread and accentuate large amounts of completely false information.

In the US, many Facebook accounts and private pages that were managed by the Internet Research Agency, a Russia-based “troll farm,” were targeted by Special Counsel Robert Mueller’s investigation into Trump’s campaign links with Russia.

Facebook acknowledged on July 3 that it was facing multiple inquiries from US and British regulators about the Cambridge Analytica user data scandal, after its boss Mark Zuckerberg was grilled by the European Parliament and the US Congress earlier this year.

Under growing pressure, the US giant in 2018 stepped up efforts to communicate and improve technology for tackling false information. A third-party fact-checking program, started in December 2016, now has more than 25 partners in 14 countries including Argentina, the US, the Philippines and Indonesia.

It aims to “identify potentially false stories” circulating on Facebook and send them to fact checkers to review. If an article is rated as false, it appears lower in the platform’s News Feed and reduces “future views by over 80 percent on average.”

The messaging service WhatsApp is also accused of circulating false information, sometimes with tragic consequences. It has been under immense pressure to curb the spread of misinformation in India, the company’s largest market, after the lynching of more than 20 people accused of child abduction in the last two months.

WhatsApp is starting to announce measures to tackle the problem. It has taken out full-page advertisements in Indian newspapers offering “easy tips” to identify fact from fiction, and will soon launch a new feature that will clearly identify whether a message has been forwarded or written by the user.

But the company is unlikely to go much further since it stands firmly by its policy of protecting the privacy of its users with encryption technology.

In March, the tech giant announced a series of projects to tackle false information and support “credible” media organizations, promising to dedicate $300 million to the efforts over the next three years.

Despite the creation of dozens of fact-checking initiatives in recent years and first steps to tackle the problem from the internet giants, efforts to stem the proliferation of false information remain weak.

Techniques to create false information are growing more sophisticated with the development of deep fakes—manipulated videos that appear genuine but depict events or speech that never happened.

For now, deep fakes are technically difficult to create and have not yet had a big impact, but with progress they may further blur the online line between true and false. —AFP

Read Next
Corruption linked to Trece Martires vice mayor’s assassination
EDITORS' PICK
San Mig Light celebrates its 20 years in Poblacion
No arrest yet of motorcycle taxis despite termination of pilot run
Senators think TWG’s move to axe motorcycle taxi pilot run an act of ‘revenge’
Ex-aide of Imelda Marcos is New York’s No. 2 tax cheat
‘A greener, cleaner tomorrow’: A how-to guide for Filipinos who want to help with today’s energy crisis
Motorcycle taxis ‘illegal’ starting next week — LTFRB board member
MOST READ
Palace: Crisis over ABS-CBN franchise unlikely
Motorcycle taxis ‘illegal’ starting next week — LTFRB board member
ALI bares facts on Technohub deal: P4B in lease to UP, P171, not P22, per square meter per month
Prince Harry: ‘Powerful media’ is why he’s stepping away
Don't miss out on the latest news and information.