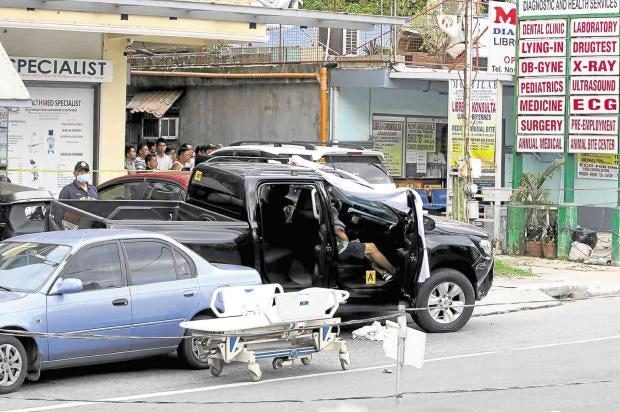 A piece of cloth shrouds the front passenger section of the pickup truck and the bullet-riddled body of Trece Martires City Vice Mayor Alexander Lubigan. (Photo by RICHARD A. REYES / Philippine Daily Inquirer)

The Presidential Anti-Corruption Commission (PACC) is looking into allegations of corruption in the city government of Trece Martires in Cavite province following the killing of its vice mayor, Alexander Lubigan.

Graft and corrupt practices at city hall may have something to do with the killing of Lubigan, who was supposedly “aware of the anomalies,” said PACC chair Dante Jimenez on Friday.

Lubigan was attacked on July 7 after leaving a gym in Trece Martires City. His aide-driver, Romulo Guillemer, also died.

“First of all, it was the ‘subject’ who came to us. As a policy in the commission, we have taken cognizance of this (and) are in the process of evaluating everything,” Jimenez said in a phone interview.

The source said the PACC also planned to “present” the informant to President Duterte.

De Sagun is on leave abroad but his chief aide, Raymund Eguillos, earlier denied that the mayor had a hand in the slay.

Both De Sagun and Lubigan were on their last terms, with the latter intending to run for mayor against De Sagun’s wife, Aiza, in 2019.

Jimenez said the informant “requested for assistance” from the PACC.

He added that he had already assigned a PACC commissioner to handle the case.