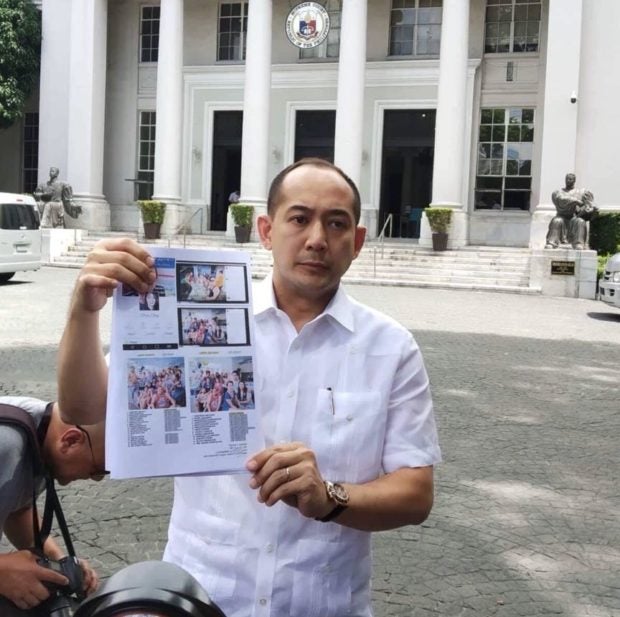 Atty. Vic Rodriguez, former Sen. Bongbong Marcos’ spokesperson, shows to the media photos of the alleged outing. He attached the photos to the pleading he filed before the PET. INQUIRER.net file photo / TETCH TORRES-TUPAS

The camp of Vice President Leni Robredo’s knowledge of the “surreptitious investigation” conducted by the Presidential Electoral Tribunal (PET) on the supposed Laguna outing while they were in the dark confirmed her access to inside information from the tribunal, Marcos’ spokesman, Atty. Vic Rodriguez said Friday.

“We are completely surprised and quite shocked with the pronouncement of the PET that an investigation on the highly improper Pansol outing had already been conducted and concluded,” Rodriguez said in a statement.

“Former Senator [Bongbong] Marcos as the Protestant has all the right to know and be duly notified by [Associate] Justice [Alfredo Benjamin] Caguioa (the justice in charge of the case) as to when the investigation commenced, who conducted it, what was the findings and penalty meted out and for violating what,” he added.

Rodriguez said that the fact that they have filed the manifestation clearly showed that they do not know anything about “the illegal Pansol outing, the purported surreptitious investigation, the highly secretive penalty imposed.”

He added that the counter-manifestation filed by the camp of Robredo where the investigation was mentioned showed that she knew about the probe conducted by PET as well as the penalties imposed.

“This clearly demonstrates that she has unbridled access to all sensitive and confidential information ordinarily available only to an insider,” Rodriguez said.

“Mrs. Robredo’s inside information confirms our earlier submission that she has already infiltrated some revisors of the PET at the expense not only of Sen. Marcos’ election protest but the entire Filipino people who are tirelessly waiting to know the truth on who really won the vice presidential elections,” he added. /jpv

Read Next
19 people killed in explosion at Chinese chemical plant
EDITORS' PICK
House energy committee chair Arroyo bats for cheap electricity
Why Tagle is a leading papal contender
KWF has no power to ban, censor written works – Lagman
Powered by style, innovation and passion
A laptop that maximizes your WiFi so you can maximize your productivity
In Borongan, nuns play hoops (not mahjong)
MOST READ
Why Tagle is a leading papal contender
SRA officials should resign after ‘illegal sugar order’ – Zubiri
Arjo Atayde reveals proposal to Maine Mendoza was ‘more than a year’ in the making
Gilas gets solid core with Clarkson, Sotto planing in
Don't miss out on the latest news and information.