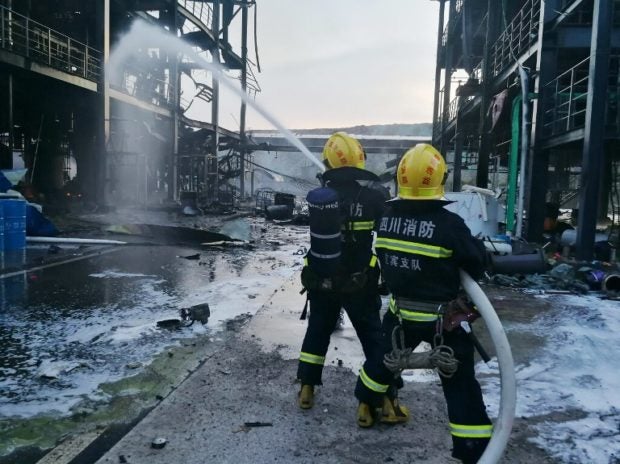 This photo taken on July 12, 2018 shows firefighters working to put out a fire after an explosion at a chemical plant in Yibin in China’s southwestern Sichuan province.
The explosion left 19 dead and injured another 12, authorities said on July 13, the latest industrial accident in a country where lax regulations often lead to tragedy. / AFP PHOTO / STR / China OUT

An explosion at a chemical plant in southwest China left 19 dead and injured another 12, authorities said Friday, the latest industrial accident in a country where lax regulations often lead to tragedy.

The blast occurred at 6:30 pm Thursday night at an industrial park in Sichuan province’s Yibin city, according to a statement on the website of the local work safety administration.

The injured had been taken to hospital and were in stable condition, county officials said, adding that the resulting fire had been put out.

Photos on a local news site showed what appeared to be the burned out shell of a building surrounded by rubble.

The company that owns the building where the fire occurred is a chemical manufacturer named Hengda, according to the official Xinhua news service.

China has been rocked by several industrial accidents in recent years.

In 2015, giant chemical blasts in a container storage facility killed at least 165 people in the northern port city of Tianjin.

The explosions caused more than $1 billion in damage and sparked widespread anger at a perceived lack of transparency over the accident’s causes and its environmental impact.

A government inquiry eventually recommended 123 people be punished. Tianjin’s mayor at the time of the accident was sentenced to 12 years in prison for graft in September.   /vvp