Banners not funny to some but satirical to others 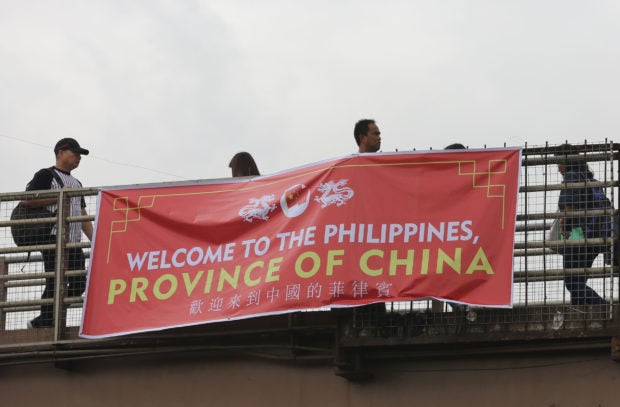 A tarpaulin with ” Welcome to the Philippines, Province of China” appears in some of the foot bridges in QC, July 12,2018. Photo taken at the footbridge along Philcoa in QC.
INQUIRER PHOTO/JOAN BONDOC

It wasn’t funny to both Malacañang and its critics, but the daring act had clearly drawn attention to one of the issues nagging the Duterte administration—its perceived soft stand in the maritime dispute between the Philippines and China.

Like thieves in the night, a still unidentified group marked the second anniversary of Manila’s victory over Beijing at the international arbitral tribunal by displaying bright red banners over major roads that proclaimed the Philippines a province of China.

The banners featured a Chinese flag flanked by two dragons. The words “Welcome to the Philippines” were written in white letters. Below that, bigger yellow letters said “Province of China.” At the bottom were Chinese characters, which loosely translated to “Welcome to China’s Philippines.”

The banners were displayed on the side of footbridges on Commonwealth Avenue and Quezon Avenue in Quezon City, on the southbound side of C-5 road and near Ninoy Aquino International Airport in Pasay City.

“It’s absurd and I’m sure it’s the enemies of our government behind it,” said presidential spokesperson Harry Roque. “So to them: Try again, you need a better gimmick than that.”

The government had “nothing to gain by hanging those tarpaulins,” he said.

“NOT FUNNY,” tweeted former Solicitor General Florin Hilbay, who had argued the Philippine position against China’s expansive claims over the South China Sea, at the Permanent Court of Arbitration in The Hague.

The tribunal ruled in favor of the Philippines on July 12, 2016.

Identifying the banner culprits would be difficult as the Metropolitan Manila Development Authority (MMDA) said these places—areas with high visibility and heavy vehicular traffic—were blind spots for its security cameras.

The banners highlighted anew concerns about the Duterte administration’s soft stand on China, as shown by its failure to assert the international tribunal’s ruling amid Beijing’s aggressive moves in the disputed waters.

Roque defended the President’s position, saying the administration has decided “to move on issues which are noncontroversial because we know that the final resolution, particularly on the issues of sovereignty on the disputed islands, will take many, many, many years.”

He said those responsible for putting up the banners were “obviously propagating a lie that we have given up on our national territory. It’s farthest from the truth.”

Jeremy Salomon, who took down the banner on the Philcoa footbridge in Quezon City, slammed its “false information.”

“Even if I am only an ordinary Filipino, I wish the culprit would ask himself: Is this the right thing to do?” he said in a Facebook post. “If he had placed ‘I love Philippines,’ do you think I would have taken this down?”

Edwin Lacierda, former spokesperson for President Benigno Aquino III, said in his Twitter account that the Philippines two years ago “stood proudly before the family of nations and the world hailed our courage” and now we have those tarpaulins.

“What a ridiculous move by the opposition,” said one Facebook user.

Others suggested the move was part of satire to hit back at Mr. Duterte’s attitude toward China.

Gideon V. Peña suggested on Twitter that it was the President who started it all, quoting him as saying in February: “Kung gusto niyo, gawin niyo na lang kaming province, Philippine province of China, eh ’di wala ng problema… Mayaman naman kayo saka province naman kami, Province of the Philippines, Republic of China.” (If you want, make us your province, Philippinr province of China, so there would be no problem … You are wealthy anyway and we are just a province, Province of the Philippines, Republic of China.) —WITH REPORTS FROM JODEE A. AGONCILLO, ALIANA LOIS DIAZ, SAMMY WESTFALL AND IANNA AGUS