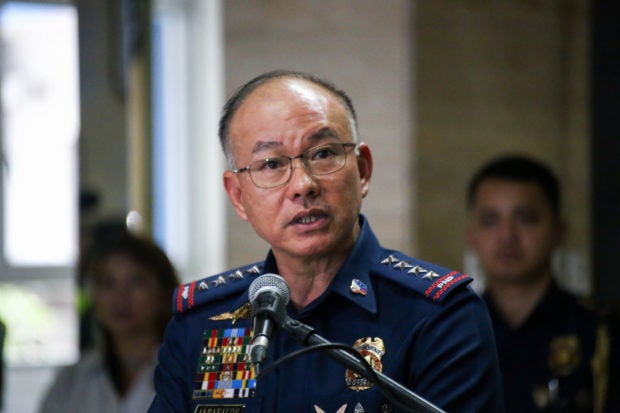 It’s the political season, according to the Philippine National Police chief.

Two motorcycle-riding gunmen on Wednesday shot dead the vice mayor of Sapa-Sapa, Tawi-Tawi province, the fourth local official assassinated in less than two weeks, but PNP Director General Oscar Albayalde said that such killings were “usual” in the run-up to elections.

“Before, during each election in the country, we have killings or ambuscades on candidates or possible candidates, also-ran or even those who win. This usually happens,” Albayalde told reporters on the sidelines of the Association of Firearms and Ammunition Dealers gun show in Mandaluyong City.

“I do not know if we can call it a trend, but many shooting incidents happen especially when elections are approaching,” he stressed, apparently referring to the country’s local elections in May 2019.

Ali was in his vehicle, which stopped for a red light on Governor Alvarez Street in Camino Nuevo, Zamboanga City, at 5 p.m. on Wednesday, when the gunmen attacked him.

The vice mayor died from three bullet wounds in the chest while undergoing treatment in a hospital.

The latest attack brought to 16 the number of mayors and vice mayors killed since President Duterte unleashed his deadly antidrug war when he came to power in 2016.

On Monday last week, Mayor Antonio Halili of Tanauan City in Batangas province was killed by a sniper during a flag-raising ceremony.

Halili gained prominence in 2016 for parading drug suspects in the streets, but Mr. Duterte had put him on a watch list of local leaders involved in the drug trade.

On Tuesday last week, gunmen on a motorcycle killed Mayor Ferdinand Bote of General Tinio town in Nueva Ecija province, but police said he was not involved in the drug trade.

Alexander Lubigan, vice mayor of Trece Martires City, Cavite province, and his driver were also killed in an ambush on Saturday. Police said his death could be election-related.

Albayalde ruled out concerns that the spate of killings was part of alleged destabilization efforts.

“The vice mayor had no known enemies and our investigators have not found any other motive besides his being groomed to replace his father, Alsaggab Lee Mohammad Ali, as town mayor,” said the PNP chief.

One of the two suspects arrested in the killing of Mayor Bote has confessed to the murder, according to Albayalde.

The PNP chief said Robert Gumacay, 35, had admitted he was hired to kill the vice mayor.

Albayalde said that the other suspect, Florencio Suarez, had also admitted to his participation in Bote’s killing.

“He (Gumacay) has given the name of who hired him. That person we cannot name right now is the subject of our manhunt. He is now a person of interest,” the PNP chief pointed out, adding that Bote’s killing was business-related.

President Duterte has directed Interior Secretary Eduardo Año to conduct a deeper investigation of the attacks on local officials.