Trump lashes NATO allies as he lands for tense summit 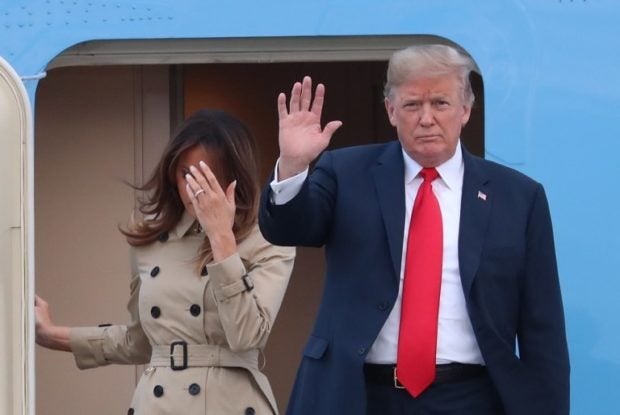 US President Donald Trump (right) and US First Lady Melania Trump disembark from Air Force One as they arrive at Melsbroek Air Base in Haachtsesteenweg. Belgium, on July 10, 2018. US President Donald Trump has arrived in Brussels on the eve of a tense NATO summit where he is set to clash with allies over defense spending. Trump arrived on Air Force One at Melsbroek military airport, shortly after saying on Twitter that NATO allies should “reimburse” the United States for spending on the alliance. AFP

BRUSSELS, Belgium – President Donald Trump told NATO allies to “reimburse” the United States for defense costs as he landed for the alliance’s most difficult summit in years.

Trump touched down in Brussels aboard Air Force One hot on the heels of a stern warning from the EU’s top official that America should “appreciate” its allies.

The leaders of the other 28 members of the NATO alliance are hoping for a show of unity despite stark transatlantic tensions on a host of issues, most notably Trump’s repeated invective against Europe over defense spending.

“Many countries in NATO, which we are expected to defend, are not only short of their current commitment of 2% (which is low), but are also delinquent for many years in payments that have not been made,” he tweeted while his plane was in the air. “Will they reimburse the U.S.?”

Trump had said before leaving Washington that his meeting in Helsinki with Russian President Vladimir Putin next Monday “may be the easiest” part of his upcoming European tour, which also includes a trip to Britain, where the government is in crisis over Brexit.

“Frankly, Putin may be the easiest of them all. Who would think?” he told reporters.

He vowed not to be “taken advantage” of by the European Union, which he accuses of freeloading by relying on the United States for its defense while blocking US imports into the bloc, the world’s biggest market.

“It’s certainly going to be an interesting time with NATO,” Trump told journalists.

The meeting of Western leaders in Brussels has the potential to turn into another public bust-up following a divisive and bad-tempered summit of G7 nations in Canada in June.

Trump has ramped up his rhetoric ahead of the talks — including in three separate tirades on Twitter on Monday and Tuesday — making the summit one of the most difficult in years for the military alliance that has underpinned European security since World War II.

European officials have expressed hopes that member states can paper over their differences, but European Union President Donald Tusk delivered a blunt message to the US leader on Tuesday.

“Dear America, appreciate your allies, after all you don’t have that many,” Tusk said, before reminding Trump that European troops had fought alongside Americans in Afghanistan following the September 11, 2001 attacks on the United States.

Trump will meet the Russian leader in the Finnish capital on July 16 for their first summit amid an ongoing investigation in the US into possible Trump campaign collusion with Russia.

Many European diplomats fear a re-run of a sequence in June when Trump clashed with his Western allies at the G7 summit, calling Canadian Prime Minister Justin Trudeau “dishonest and weak”, then praised North Korean dictator Kim Jong Un as “very talented” at a summit afterward.

“He chews out the allies then embraces the adversary,” one diplomat told AFP recently.

Trump set the stage for clashes at the NATO summit by writing to around a dozen allies to berate them for lagging on a 2014 pledge to try to spend two percent of GDP on defense by 2024.

Speaking to a cheering crowd at a rally this week, Trump told them that the US would no longer be “the schmucks paying for the whole thing.”

According to a joint declaration prepared in advance of the summit, which was seen by AFP, NATO members will make an “unwavering commitment to all aspects of the defense investment pledge agreed at the 2014 Wales Summit” which includes the 2.0-percent target.

But it adds that they will also “submit credible national plans on its implementation” in language that will perhaps please the US president.

But NATO chief Jens Stoltenberg pointed out that military spending had been rising in Europe since 2014 and members were making efforts to meet the objective, particularly Germany, which is often singled out by Trump for criticism.

Europe’s biggest economy is on course to spend just 1.24 percent of GDP on defense in 2018.

US ambassador to NATO Kay Bailey Hutchison told reporters that Trump would also recommit to one of the founding articles of NATO — Article 5 — which holds that an attack on one member is an attack on them all. /cbb