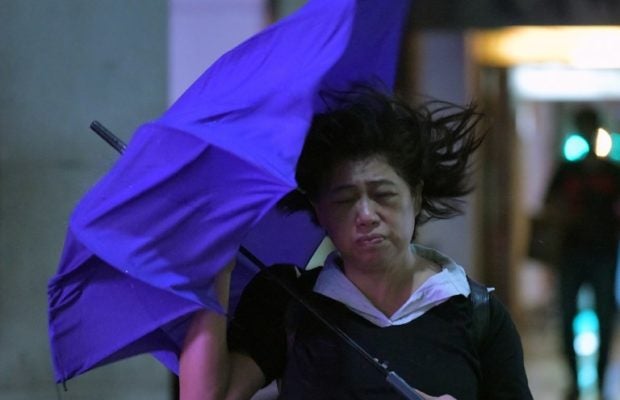 A woman walks through heavy wind and rain in Keelung on July 10, 2018, as Typhoon Maria moved towards Taiwan. Taiwan began evacuating residents in mountainous areas while offices and schools were closed and flights were canceled as Typhoon Maria churned towards the island bringing torrential rain and powerful winds. AFP

TAIPEI, Taiwan – Taiwan evacuated thousands of residents in mountainous areas while offices and schools were closed and flights canceled Tuesday as Typhoon Maria churned towards the island bringing torrential rain and powerful winds.

Maria was 200 kilometers (120 miles) east-northeast of the northeastern coastal town of Yilan packing gusts of up to 173 kilometers an hour as of 10:00 pm (1400 GMT), the weather bureau said.

Its impact was expected to be strongest from late Tuesday to early Wednesday although it has weakened slightly in the past few hours, with up to 500 millimeters (20 inches) of rainfall forecast for some areas, the bureau added.

Authorities said more than 2,000 people had been evacuated so far. Local television showed soldiers going door to door in a mountainside village in Yilan to help evacuate residents.

Officials have warned of possible floods and mudslides.

“I have ordered the troops to stand by for relevant disaster prevention and relief … I also want to urge the public again to make typhoon preparations as early as possible,” President Tsai Ing-wen said in a post on her Facebook page.

Premier William Lai also warned local authorities and the public to “remain vigilant” for the first typhoon of the season in Taiwan.

He urged people to stay indoors and cooperate with the government’s disaster prevention plans.

Offices and schools closed in eight cities and counties on Tuesday afternoon with heavy rains and winds starting to lash parts of the island.

Maria also disrupted air and land traffic, as a total of 118 domestic flights and 175 international flights were canceled, according to Central Emergency Operation Centre.

Hong Kong’s Cathay Pacific said it had canceled more than a dozen flights between Hong Kong and Taipei, as well as from Hong Kong to Okinawa on Tuesday and Wednesday.

Buses to Yilan were suspended for Tuesday night as some routes were closed for safety reasons. Some trains to scenic Hualien were also halted, where strong waves started to pound the shore.

Fishermen in coastal Keeling brought in their catch and secured their boats ahead of the storm. Ferry services to outlying islands were canceled.

Farmers in Yilan rushed to their fields to harvest scallions, the county’s most famous produce.

The typhoon was not expected to make a direct hit if it continues on its current trajectory, which would see it skirt northern Taiwan, according to the weather bureau.

Taiwan is frequently hit by typhoons in the summer. Last year more than 100 people were injured when Typhoon Nesat battered the island, causing flooding and widespread power outages. /cbb