‘SOWING INTRIGUE AND PLANTING EVIDENCE HAVE BEEN PART OF THE PRACTICE OF PRESIDENT DUTERTE’
By: Jodee A. Agoncillo - Reporter / @jagoncilloINQ
Philippine Daily Inquirer / 07:25 AM June 20, 2018 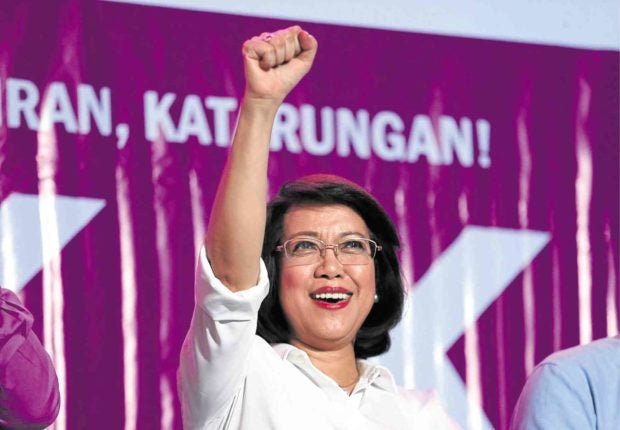 Ousted Chief Justice Maria Lourdes Sereno on Tuesday accused President Rodrigo Duterte of weakening the rule of law, hours after the Supreme Court upheld its May 11 decision to grant a government petition to remove her from office.

“The responsibility for the weakening of the rule of law is his. He has admitted that sowing intrigue and planting evidence have been part of his practice,” Sereno said in a speech to a gathering of her supporters at the University of the Philippines Diliman in Quezon City.

The gathering was held to protest the Supreme Court’s final ruling.

“I stand before you now stripped of my authority and position by an unjust decision,” Sereno said.

“But I do not need to be the Chief Justice to defend the laws and the Constitution,” she added. “My story is not unique. It is a mirror, a warning and a call to action to each of us together as a nation.”

Sereno said the House leadership had been determined to impeach her, with Speaker Pantaleon Alvarez ordering the suspension of deliberations on the judiciary’s budget until the Supreme Court released all the documents the complainant, lawyer Lorenzo Gadon, had requested.

“The message was clear: the House leadership was going to hold hostage the judiciary’s budget unless the Supreme Court cooperated fully with its plan to remove me,” she said.

“How could she honestly believe that the budget of the [Supreme Court] could be held hostage by the [House]? Unless, if she does not know the Constitution,” Fariñas told reporters in a mobile group chat.

Sereno said she had underestimated the extent to which the government was willing to go to unseat her, even trying an “abominable perversion of the rules of court and in total violation of the Constitution.”

“My accusers, refusing to inhibit themselves . . . also became the judges of my case,” she said, referring to the eight Supreme Court justices who voted to grant the government’s quo warranto petition to remove her.

“Worst of all, the quo warranto has made our courts, and the entire civil service, constantly vulnerable to political intimidation,” she said.

Vice President Leni Robredo said the tribunal’s final ruling was a “dark moment for our republic.”

In a statement, Robredo urged the people to be vigilant for “other impending assaults on our Constitution and laws, as well as the freedoms they were enacted to protect.”

The Liberal Party, to which Robredo is affiliated, echoed her sentiment.

“The [Supreme Court] is beyond redemption. It is now our duty and obligation to protect what we have left of our democracy and freedoms,” said the party’s vice president for external affairs, former Rep. Erin Tañada.

Senate Minority Leader Franklin Drilon said the final ruling had made any impeachable officer vulnerable to removal by disqualification.

“As I said at the start of all these questions, this is a slippery slope. Now, any officer who is subject to impeachment can be removed through a quo warranto petition,” Drilon told reporters.

In a text message, Sen. JV Ejercito said he hoped the Supreme Court would in the future revisit its ruling and correct “this sad episode in our history.”

Opposition lawmakers said they would proceed with their plan to bring impeachment complaints against the justices who voted to grant Solicitor General Jose Calida’s quo warranto petition to remove Sereno from office.

Akbayan Rep. Tomasito Villarin said the impeachment complaints would be filed in the House “as soon as we finished compiling pertinent facts relevant to the individual charges against each of the eight justices.”

Ifugao Rep. Teddy Baguilat Jr. said Sereno should be fielded by the Liberal Party as a senatorial candidate in next year’s midterm elections.

“She needs a platform. In another branch of government,” Baguilat tweeted.

Bayan Muna Rep. Carlos Isagani Zarate said Sereno’s ouster would now allow President Duterte “to appoint a Chief Justice [who] would kowtow to his will.” —With reports from DJ Yap and Vince F. Nonato