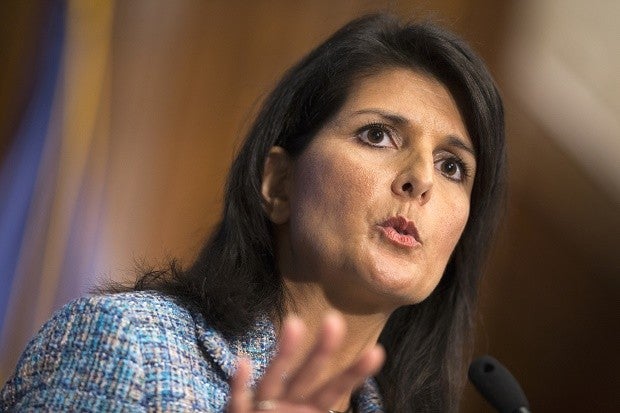 US Ambassador to the UN Nikki Haley announced on Tuesday, June 19, 2018, that the US had withdrawn from the United Nations Human Rights Council over ‘hypocrisy’ among its members and ‘unrelenting bias’ against Israel. AP FILE

WASHINGTON, United States – The United States withdrew from the United Nations Human Rights Council on Tuesday, condemning the “hypocrisy” of its members and its alleged “unrelenting bias” against Israel.

The US ambassador to the United Nations, Nikki Haley, came to Washington to announce the decision alongside President Donald Trump’s top diplomat, Secretary of State Mike Pompeo.

Both insisted the United States would remain a leading champion of human rights but, for many, the decision will reflect Trump’s general hostility to the world body and to multilateral diplomacy in general.

The announcement came after the top UN human rights official criticized Washington for separating migrant children from their parents who are seeking asylum after crossing into the country from Mexico.

But Haley and Pompeo stressed the decision had been made after a long year of efforts to shame the council into reform and to remove member states that themselves commit abuses.

“These reforms were needed in order to make the council a serious advocate for human rights,” Haley said.

“For too long, the Human Rights Council has been a protector of human rights abusers, and a cesspool of political bias. Regrettably, it is now clear that our call for reform was not heeded.”

The Geneva-based body was established in 2006 to promote and protect human rights worldwide, but its pronouncements and reports have often clashed with US priorities.

In particular, the council’s focus on Israeli behavior towards Palestinians in the territory it occupies on the West Bank and in Gaza has infuriated Washington.

But, as Haley stressed, Washington also believes it comes up short on criticizing even flagrant abuses by US opponents like Venezuela and Cuba.

“Countries have colluded with each other to undermine the current method of selecting members,” Pompeo said.

“And the council’s continued and well-documented bias against Israel is unconscionable,” he said.

“Since its creation, the council has adopted more resolutions condemning Israel than against the rest of the world combined.”

Israel’s Prime Minister Benjamin Netanyahu welcomed the US move, branding the council “a biased, hostile, anti-Israel organization that has betrayed its mission of protecting human rights.”

Haley, who issued a warning a year ago that Washington would make good on its threat to leave the council if reforms were not carried through, used even starker language.

“We take this step because our commitment does not allow us to remain a part of a hypocritical and self-serving organization that makes a mockery of human rights,” she said.

On Monday, UN High Commissioner for Human Rights Zeid Ra’ad Al Hussein — a Jordanian — had rebuked Trump over the US practice of splitting up migrant families detained on the Mexican border.

“The thought that any state would seek to deter parents by inflicting such abuse on children is unconscionable,” he said.

Independent watchdog Human Rights Watch criticized the move, warning Washington’s absence at the council would put the onus on other governments to address the world’s most serious rights problems.

“The Trump administration’s withdrawal is a sad reflection of its one-dimensional human rights policy: defending Israeli abuses from criticism takes precedence above all else,” executive director Kenneth Roth said.

“The UN Human Rights Council has played an important role in such countries as North Korea, Syria, Myanmar and South Sudan, but all Trump seems to care about is defending Israel.”

US criticism stems from the fact that Israel is the only country that has a dedicated agenda item at council meetings, one defended in particular by the Arab bloc of countries.

Known as “Item 7”, this items means that Israel’s treatment of the Palestinians comes under scrutiny at each of three annual sessions.

The United States refused to join the body when it was created in 2006, when George W. Bush was in the White House and his ambassador to the UN was John Bolton — now Trump’s UN-skeptic national security advisor.

After Barack Obama came to power, Washington joined the council in 2009.