Chinese city opens lane for pedestrians who use phones while walking 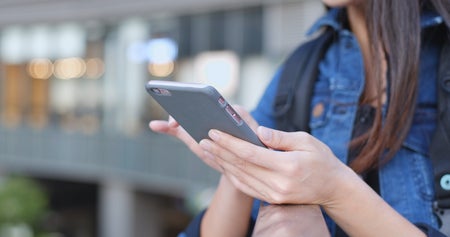 Texting while walking could be an accident waiting to happen, but one Chinese city is embracing its phone-obsessed pedestrians.

In northern China’s city of Xi’an, a pavement on Yanta Road has a 100-meter long, 80-centimeter wide lane dedicated to pedestrians using their phones. An image of a mobile phone is painted along the lane to indicate where phone users can stay.

A shopping mall had the specific lane in the works for a month, according to a report by Shaanxi Online News via BBC. It was to address the constant need of security personnel to remind motorists not to drive on the pavement which would have pedestrians fixed on their phones.

While some citizens interviewed in the report welcomed the project, some expressed their opinion that it wasn’t useful, because the lanes were near a parking lot rather than a major thoroughfare.

This isn’t the first city in China to implement such a scheme. In 2014, a private company divided a pavement into two parts in Chonqing: one for smartphone junkies and one for ordinary pedestrians.

The company, Meixin, intended for it to make people consider the amount of time they spent on their smartphones. However, the initiative has become a tourist attraction and has caused some congestion as people stop to snap photos of the signs — hopefully, while on the phone lane. Niña V. Guno/JB

Bumper car seized after Chinese woman drives it on roads

‘Texting while walking’ now a crime in Honolulu

Read Next
LRT-1 to offer free rides on Independence Day
EDITORS' PICK
Being a celebrity isn’t wholly an ‘advantage’ in the election, says Sotto
Acer starts the year off strong with the Aspire Vero National Geographic Edition
Octogenarian jailed for ‘stealing mangoes’ freed after people chip in for bail
Gov’t eyeing COVID-19 tests in pharmacies
Gear up and get ready to play with Yamaha Mio Gear
Over 3 Million worth of prizes to be won at Smart Padala’s SENDali Manalo Promo!
MOST READ
Natural immunity more potent than vaccines during US Delta wave—study
Mocha Uson, Michele Gumabao draw flak for running under party-list representing mothers
Bongbong Marcos-Sara Duterte tandem adds Zubiri, Gadon, Marcoleta to Senate slate
Help pours in for octogenarian jailed for ‘stealing’ mangoes in Pangasinan
Don't miss out on the latest news and information.