Bumper car seized after Chinese woman drives it on roads 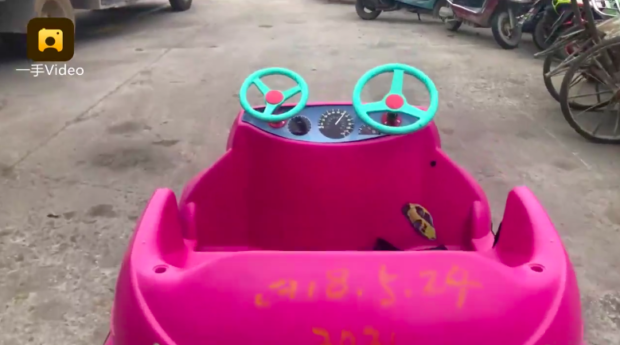 A Chinese woman taking a bumper car for a spin was pulled over, ending her trip with the vehicle being seized.

The 50-year-old woman owns a bumper car shop in the city, according to Chinese news portal hangzhou.com.cn.

Perhaps she fancied herself ingenious for driving the bumper car all the way to the shop — she had done so multiple times and had already received several warnings from officers.

Besides using an unlicensed vehicle, a video that went viral on Chinese social media shows the woman blatantly flouting traffic rules, zooming across three lanes on a highway in Guiyang, Guizhou Province.

Officers stopped her and seized the bright pink car.

In 2016, two men from Shenyang, Liaoning caught Weibo netizens’ attention when both were stopped at a traffic light in bumper cars.

Though netizens were amused and hoped to try the same stunt, authorities dashed the act as “dangerous.” Niña V. Guno/JB

Hotel valet has lucky escape, but Porsche gets crunched

Read Next
French president’s chief of staff faces corruption probe
EDITORS' PICK
Gear up and get ready to play with Yamaha Mio Gear
Over 3 Million worth of prizes to be won at Smart Padala’s SENDali Manalo Promo!
Octogenarian jailed for ‘stealing mangoes’ freed after people chip in for bail
Gov’t eyeing COVID-19 tests in pharmacies
Acer starts the year off strong with the Aspire Vero National Geographic Edition
Being a celebrity isn’t wholly an ‘advantage’ in the election, says Sotto
MOST READ
Imelda Marcos trends on Twitter after octogenarian jailed for allegedly stealing mangoes
Help pours in for octogenarian jailed for ‘stealing’ mangoes in Pangasinan
Natural immunity more potent than vaccines during US Delta wave—study
SSS: Members on home quarantine due to COVID-19 can apply for sickness benefit
Don't miss out on the latest news and information.