‘My child, we have won’ | Inquirer News
Close
menu
search

80-year-old ‘lola’ gives thanks for piece of land
By: Leila B. Salaverria, Tonette Orejas - @inquirerdotnet
Philippine Daily Inquirer / 01:18 AM November 25, 2011 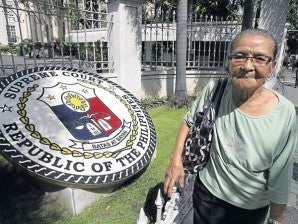 IN HER LIFETIME Virginia “Lola Inyang” Paligutan, 80, traveled to Manila from Tarlac to express her gratitude to the Supreme Court for ordering the distribution of Hacienda Luisita in Tarlac to farmworkers. NIÑO JESUS ORBETA

When news broke that the Supreme Court had decided to break up Hacienda Luisita and distribute the sprawling sugar plantation to farmers, 80-year-old Virginia Paligutan wept.

She shed tears of joy because hacienda workers, who had been caught in the vortex of a decades-long period of peasant unrest over a feudal land ownership system, would finally get a piece of the vast estate straddling Tarlac City and the towns of Concepcion and La Paz.

Virginia recalled that one of her sons, Valentino, who was retrenched from the hacienda after it encountered worker protests over a stock distribution arrangement in lieu of land distribution under the 1988 Comprehensive Agrarian Reform Program (CARP), had gone to the hills and joined the New People’s Army.

Valentino, then 52, died of a gunshot wound in an encounter with government troops in 2005.

“My child, we have won,” she remembered saying on hearing the Supreme Court ruling.

“We have worked so hard for this,” Virginia told the Inquirer outside the Supreme Court building, where she had joined scores of Luisita farmers to thank the magistrates for their ruling.

“This is not for me,” said the grandmother of 13 children, including three of Valentino’s under her care. “I am already old.”

The long-pending Hacienda Luisita impasse had been described by antipoverty advocates as a “sword” pointed at the heart of the agrarian reform program that then President Corazon Aquino had promulgated in 1988—two years after she was installed in Malacañang following the ouster of the dictator Ferdinand Marcos.

The estate was acquired from Spanish owners in 1958 on loans guaranteed by the government on condition that it would be distributed at cost to tillers under the Ramon Magsaysay administration’s counterinsurgency program.

The democracy icon’s failure to fulfill an election campaign promise to undertake agrarian reform as the centerpiece of a social justice program to alleviate poverty and remove one of the major causes of unrest led to a demonstration outside Malacañang in January 1987—11 months into her presidency. Thirteen protesters were killed by government troops.

Virginia has spent all her life as a worker at Hacienda Luisita. “I did not even own a pot of soil before,” she said at the Supreme Court, thinking back on all those years that she had toiled at the Tarlac estate.

Now, she said, she has something to pass on to the next generation of her family.

Though she walks a little slowly, she was still sharp and spunky, braving the morning heat to be able to express her gratitude.

Virginia was up at 2 a.m. on Thursday, raring to travel from Tarlac to the Supreme Court building in Manila. Her relatives had been apprehensive about her plan, fearing she might not be up to it given her age.

But she was adamant. It was also her first time to join a mass action in Manila.

Virginia said her family planned to continue planting rice on their land. She also hopes her family would not sell the land in the future. She said workers at the hacienda shared her joy at the Supreme Court ruling.

“Everybody was dancing,” she said. “It feels like a new day for us.”

The ruling was hailed as a victory for peasants who have long struggled to break the stranglehold of powerful political clans on the country’s rich agricultural lands.

“This has been a 50-year struggle already and this is a victory not only for these farmers, but for the many who are similarly situated,” said Romeo Capulong, a lawyer for the farmers.

“This gives hope to thousands of farmers who are continually being oppressed, that they too can dream to one day own the land they till,” he added.

But Capulong said he expected President Aquino’s relatives would file an appeal, and that no distribution of land on the estate would happen until the case was deemed “final and executory.”

The battle over the estate’s ownership has allowed Mr. Aquino’s critics to portray the popular President’s family as a greedy political dynasty.

Its resolution could send a signal that owners of some 1 million hectares of the nation’s prime agricultural land who have evaded coverage would also be subjected to agrarian reform with three years left before the program’s mandated completion under a 2009 law.

The CARP was meant to give farmers ownership of the land they worked on, but it was watered down from tougher intended legislation.

This allowed the Aquino-Cojuangco clan and other powerful families to use controversial exemptions and loopholes to keep the land.

Presidential spokesperson Edwin Lacierda emphasized on Thursday that the President had sold his 1 percent stake in the farm shortly after taking office.

But it remains under the control of the family of Mr. Aquino’s late mother, the Cojuangcos—one of the most influential clans in Philippine politics. With a report from AFP