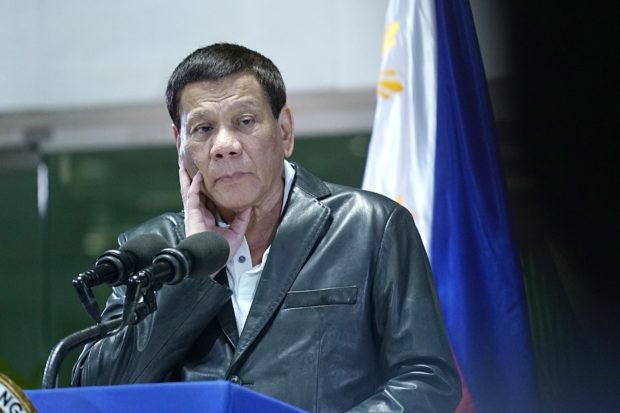 President Rodrigo Roa Duterte listens to the query from one of the members of the media after delivering his arrival statement at the Ninoy Aquino International Airport on June 5, 2018 following a successful three-day official visit to the Republic of Korea. KING RODRIGUEZ/PRESIDENTIAL PHOTO

There is nothing to worry about the health of President Rodrigo Duterte, Malacañang said on Thursday, two days after the Chief Executive revealed that he vomited in the plane on his way back to Manila from his official visit in Seoul.

Presidential Spokesperson Harry Roque said Duterte suffered migraine during his trip back to the Philippines.

“This has been a recurring problem of the President. Nagkakaroon siya ng matinding migraine from time to time. He says this is related to an earlier motorcycle accident that he suffered. But it comes and goes,” Roque noted in a Palace briefing.

He, however, said this was the first time the President had a migraine attack in the plane.

“But of the many trips I’ve been with the President, this is the first time he had a migraine attack in the plane,” he said.

He added that the President even asked him to formally apologize to the passengers on the commercial flight because he could not go around and greet them.

“But I think it’s the first time I saw him suffer from this migraine and yes, sinabi naman niya na he was sick on the flight because of the migraine,” Roque said.

“Otherwise, his health is good. It’s the first time I saw him suffer from a migraine and I have gone on at least six of seven trips with him,” he pointed out.

Asked if the President had already undergone an annual executive check-up, the Palace spokesman said: “Well I will inquire if he has had an annual check-up and I will let you know.”   /kga