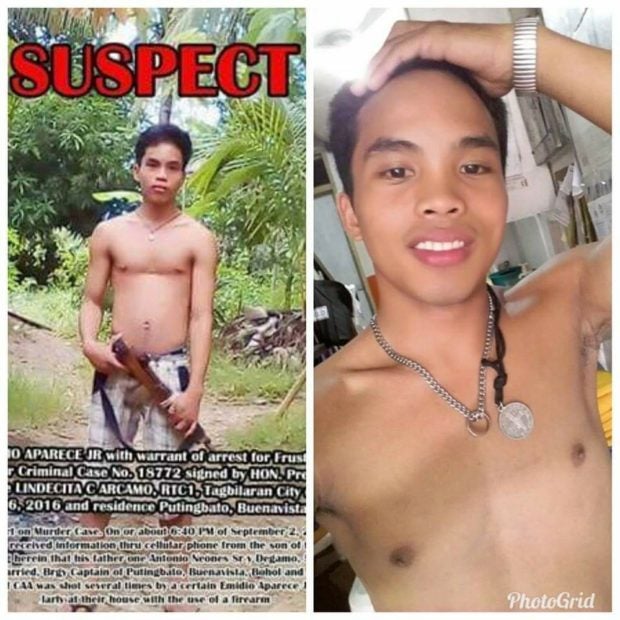 Emigdio Aparece, Jr., one of the three suspects in the killing of Buenavista, Bohol Mayor Ronald Lowell “Sample” Tirol was killed on Wednesday morning in Danao town, Bohol. File Photo from BPPO

TAGBILARAN CITY, Bohol – A suspected gun-for-hire, who has been wanted for killing a Bohol mayor, was killed during a shoot-out with policemen on Wednesday early morning.

Emigdio Aparece, Jr., one of the three suspects in the killing of Buenavista, Bohol Mayor Ronald Lowell “Sample” Tirol was killed, according to SPO3 Ramiel Gumapac, officer-in-charge of the Danao police station.

Gumapac said concerned citizens tipped the police that Aparece was sighted in Sitio Sta. Anna in Barangay Concepcion in Danao town on Tuesday.

At 2:45 a.m. on Wednesday, an operation was conducted by the Provincial Mobile Force Company SWAT led by Supt. Gaylord Tamayo and Provincial Intelligence Office (PIB) of the Bohol Provincial Police Office.

Aparece noticed the approaching policemen and shot first. The officers then fired back resulting in the shoot-out and the death of Aparece, said Gumapac.

But no one was hurt from among the police.

Aparece was killed on the burial day of Tirol, who was killed inside the cockpit arena that he owned in Buenavista, past 3 p.m. last May 27. Aparece was allegedly served as look-out, while Elmer Melencion was the gunman.

Aparece, who has been evading arrest, has a P200,000 bounty on his head and pending multiple murder charges. He was identified as the one who killed SPO1 Alejandro Estorgio of Buenavista police station last February while conducting foot patrol to secure a town’s disco party.

Aparece was also tagged in the killing of barangay captain Antonio Neones Sr. and councilor Ursolo Petalcorin, who were shot dead in Buenavista in 2016 and 2017.

He was also the prime suspect in the killings of militiaman Benedicto Melencion on March 22, 2017 and Jessie Versaga on Feb.18, 2017.

The manhunt operations against two other suspects in Tirol’s killing, including Melencion’s, continued.