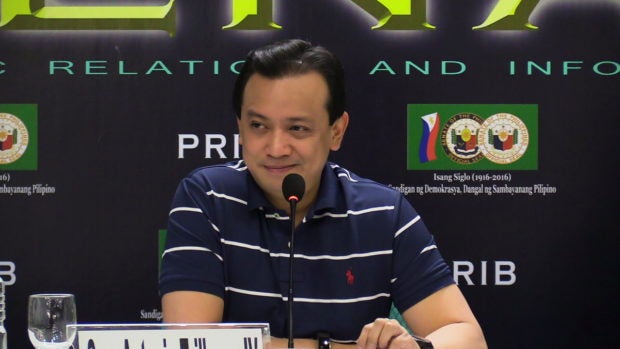 Belying the accusations against him, Senator Antonio Trillanes IV on Wednesday vowed to face the grave threats case filed against him by Labor Undersecretary Jacinto Paras.

Trillanes even mocked Paras, saying the former congressman has the “zero-credibility of a cellphone thief.”

“Walang katotohanan ‘yan,” he said when sought for comment on the case filed against him at the Pasay City Prosecutor’s Office.

In the complaint, Paras accused Trillanes of allegedly threatening his life when their paths crossed at the Senate last week.

The senator’s “cellphone thief” remark was an apparent reference to Anakbayan Rep. Tom Villarin’s complaint against Paras, whom he accused of  “snatching” his high-end cellular phone at a congressional hearing last March.

The senator earlier admitted confronting Paras during their encounter in the Senate but denied cursing or threatening the latter.

Read Next
Pope nixes German plan to allow Communion for non-Catholics
EDITORS' PICK
A delightful blessing!
Gov’t plans to open COVID-19 vaccination for 5- to 11-yr-olds by January 2022
Gov’t eyeing COVID-19 vaccine booster for essential workers, indigents by Dec. 10
Villar Group gears up for AllValue Shopping Party on Dec. 3; around P 1-million promos and discounts up for grabs
Omicron variant detected in more countries as scientists race to find answers
Legarda: Ending Violence Against Women, a cause for all
MOST READ
Omicron poses ‘very high’ global risk, countries must prepare–WHO
Quiboloy warns of ‘much worse than Omicron virus’ if his ‘persecution’ is not stopped
Bongbong Marcos’ conviction in tax case not a crime involving moral turpitude — lawyer
Marcoleta defends pol ads on ABS-CBN
Don't miss out on the latest news and information.