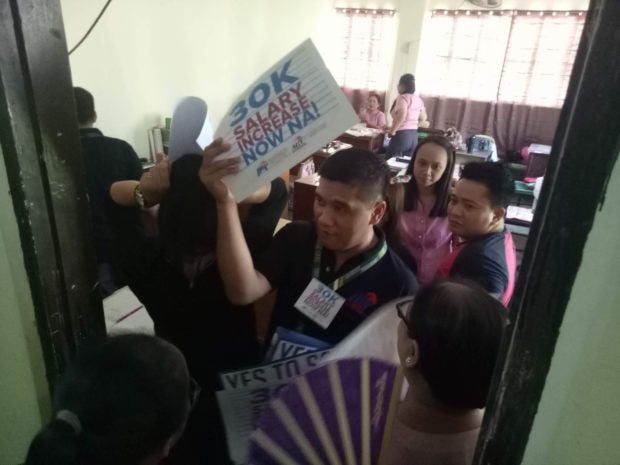 LUNCH PROTEST Members of the Alliance of Concerned Teachers in Central Luzon call for an increase in the starting salary of teachers during a lunch break protest as classes opened on Monday. —CONTRIBUTED PHOTO

At the opening of classes in public schools nationwide on Monday, teachers demanded an increase in the basic monthly pay from P20,179 for the entry level to P30,000, an amount almost equal the base pay of a Police Officer 1 or a private.

They mounted their protests during lunch break and did not disrupt classes, according to Romly Clemente, the group’s president.

Members of the youth group Anakbayan held a picket in Iloilo City to denounce the collection of mandatory fees which, they said, was contrary to a Department of Education (DepEd) directive.

Monday’s school opening was marred by the lack of classrooms and overcrowding, but the Department of Education said classes started without major problems.

In Metro Manila, for instance, about 80 percent of the estimated 800 public schools still practice double shifting because of the classroom shortage.

At Batasan Hills National High School in Quezon City, nearly 16,000 students are enrolled from Grades 7 to 12. Grade 8 has 3,641 students divided in 79 sections.

With a teacher-student ratio at 1:55 for Grades 9 and 10 and 1:45 to 50 in senior high, some teachers used lapel microphones, according to the principal, Proceso Lera.

Late enrollees could still further bloat the student population. Around 23.4 million students, including 12.6 million in elementary and 6.7 million in junior high, were expected to attend classes in public schools.

During their nationwide protest, ACT members donned headdresses, held placards and launched signature campaigns to press their demand to raise the entry salary of teachers.

“We have been promised of salary increase three times in a span of two years, but nothing came out from those sweet words,” ACT chair Benjamin Valbuena said in a statement. “We cannot help but feel shortchanged.”

Valbuena earlier assailed the lack of nonteaching personnel in schools, resulting in teachers being assigned to perform other administrative tasks and to serve as guidance counselors, librarians, clerks and custodians.

ACT assailed the selective salary increase given to uniformed personnel like soldiers and policemen in January, saying it distorted the public sector salary scheme.

“This discriminatory action sows demoralization and resentment among civilian personnel,” it said.

In a speech in May, President Duterte promised anew that the salaries of school teachers would be raised next, but added that doubling their pay was not feasible at the moment.

Presidential spokesperson Harry Roque explained that under the Salary Standardization Law, there were still two more tranches of salary increase—this year and the next. 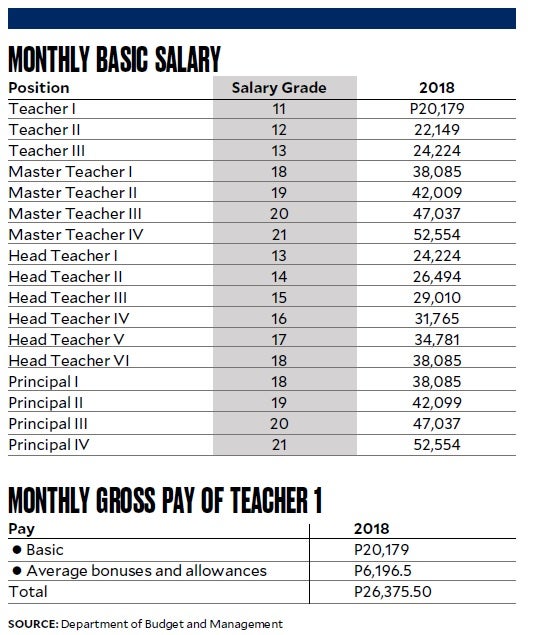 “Unfortunately, the government misses its obligation to the most important factor of education—the teachers,” said Benjo Basas, chair of the coalition.

At Epza Elementary School in Angeles City, science teacher Lorna Lacsina gathered 50 of her colleagues who wore black shirts or black armbands as they supported a House bill seeking to increase salaries of public school teachers and personnel.

House Bill No. 7211, sponsored by ACT Rep. Antonio Tinio, seeks to raise the basic monthly pay of nonteaching personnel to P16,000 and to implement an entry level salary of P30,000 for teachers and P31,000 for instructors.

They attributed the smooth opening to monthslong preparation of teachers and administrators in over 46,000 public schools nationwide, including the early registration that began as early as January.

In a briefing, Education Secretary Leonor Briones said what were dubbed “usual problems” that marred school openings before should now be considered “unusual.” —WITH A REPORT FROM NESTOR P. BURGOS