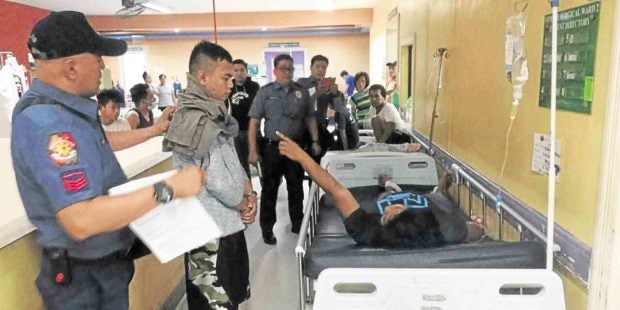 A Pasig City policeman is facing criminal charges for allegedly shooting a motorist dead and wounding another man in front of their families in a road altercation Wednesday night in Marikina City.

An investigation report to the Eastern Police District (EPD) said the shooting happened around 8:45 p.m. in Barangay Marikina Heights.

Bunga and Eayam were then in a gray Toyota Avanza with their respective families when Villamil, who was off-duty and traveling on a bicycle, hit a side mirror of the victims’ vehicle near the corner of Tanguile and Apitong streets.

Villamil then had two companions, while the Bungas and Eayams had just left their houses at Milagrosa Compound in the same barangay and were on their way to their hometown in Apayao province.

When Bunga got off the vehicle to confront Villamil, the officer and his two unidentified companions reportedly punched him. The others in the Avanza managed to intervene, but Villamil rushed to his house on Tanguile to get his gun.

The 35-year-old Bunga sustained bullet wounds in different parts of the body and was brought to Amang Rodriguez Memorial Medical Center, where he was pronounced dead at 1:40 a.m. Eayam, 24, was treated for shots in the ankles.

Villamil surrendered to the Marikina police around 11 p.m., turning over his service firearm.

The EPD director, Chief Supt. Reynaldo Biay Jr., ordered Villamil relieved of his duties. Still in detention at press time at the Marikina police station, the officer is facing charges of homicide and frustrated homicide.

Villamil entered the service in 2016 and was assigned to a precinct in Pasig in February this year, according to the Pasig police chief, Supt. Orlando Yebra.

He previously reported to the mobile force battalion of the National Capital Region Police Office in Camp Bagong Diwa in Bicutan, Taguig City.

Last week, another policeman under the EPD was ordered relieved by Biay for figuring in a road rage incident also in Marikina. PO1 Bernard Cantre found himself in hot water for allegedly threatening to shoot a jeepney driver in Barangay Fortune.

The motorbike-riding Cantre was then in civilian clothes and had no helmet on when he berated the driver purportedly over the latter’s recklessness on the road.

A jeepney passenger who witnessed the May 25 encounter took a video of the two men’s confrontation at the barangay hall and posted the clip on Facebook.

Biay has ordered an investigation into the incident.