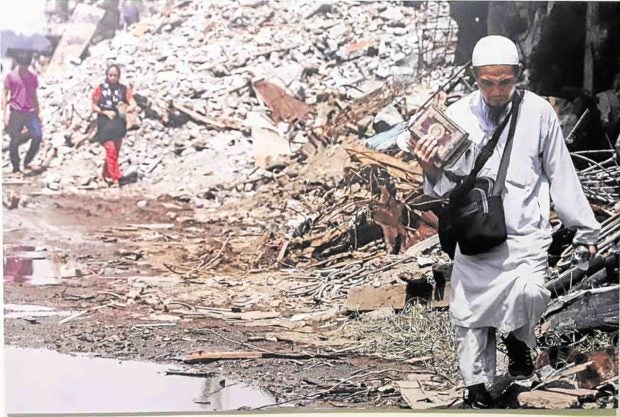 SAVING THE QURAN A Muslim man recovers copies of the Quran amid the rubble and ruins of Marawi City. —BOBBY TIMONERA

Emely Comaling recalled having had a hard time memorizing an Islamic prayer that her Muslim colleagues had taught her. But it was something she had to master—for her life depended on it.

By reciting the prayer, she could pass herself off as a Muslim — and be spared from harm — should Islamic State-inspired gunmen ask for her identity.

“Right now, I really don’t remember any Islamic prayer that was taught to me. I only remember greetings like ‘Assalamualaikum’ (peace be with you),” said Comaling, one of the Christians who were trapped in Marawi during the five-month siege of the city last year.

Comaling recalled her experience in a panel discussion during the launch of the documentary film “Maratabat: Mga Kuwento ng Kagitingan sa Marawi” (Honor: Stories of Valor in Marawi), at Yuchengco Museum in Makati City on Thursday, a day after the first anniversary of the siege.

“Maratabat” means “sense of pride and honor” in the Maranao dialect. For families belonging to the Moro ethnic group, the loss of such honor could be enough to trigger a clan feud, or a “rido.”

But in the context of the Marawi war, it also means finding pride in helping and saving one’s fellowmen in life-and-death situations and later helping them heal and rebuild.

“Maratabat” is thus applicable to non-Muslims, said Nor-ain Ahmad Mohammad, a youth leader and one of the residents of the Marawi area that became “ground zero” of the military operations.

The documentary recounts the deeds of the “Suicide Squad” — a group of volunteers from prominent clans in Lanao del Sur — who rescued people trapped at the height of the Marawi siege. It highlights the stories of Muslims who helped Christians avoid being captured by terrorists.

Also featured is the peace-building organization International Alert Philippines, whose officials spoke on the importance of local knowledge and context in the rebuilding process.

Comaling, who was originally from Davao City and now a project officer of Maranao People Development Center Inc. (Maradeca), a nongovernment organization based in Marawi, recalled how she feared for her and her family’s safety after reading social media posts about terrorists beheading Christians in the city.

Men in black outfits, she said, roamed the streets and asked incriminating questions of people they met.

Comaling narrated how her Muslim friends lent her their hijab, the head covering worn by Muslim women, so she could look just like them.

Saripada “Tong” Pacasum Jr., a member of Suicide Squad and head of the Lanao del Sur local disaster risk reduction and management office, said he had to lie to his family to pursue the group’s mission. “I told my daughter I was not a part of the operations she had watched on TV,” he said.

Pacasum and his fellow volunteers went in and out of the city, first to save their relatives. They increasingly became organized and came up later with a rescue hotline number, through which they received more distress calls about people trapped in the city.

Armed only with basic protective gear like white helmets, they entered the main battle area by car.

Looking back, Pacasum said, what he did was part of his “jihad” (struggle) to stand for fellow Muslims. “We should not be complacent. We should not leave our people alone so that Marawi won’t experience another siege in the future,” he said.

A year after the siege, Salic Ibrahim, Maradeca’s chief executive officer, noted that residents forced to flee the fighting remained at the evacuation centers, coping with inadequate aid.

The water supply has particularly become a problem in this holy month of Ramadan, as the evacuees need it for religious purposes like ablution, aside from cooking meals before and after their daily fasts. Some of the food coming from foreign donors proved unappetizing for the children, Ibrahim also noted.

“The mind-set of those who want to help us should not just be [confined to] ‘evacuation system.’ This is not like the situation after Supertyphoon ‘Yolanda,’” Ibrahim said.

While Marawi has been receiving aid from different countries, International Alert stressed that the residents should learn to stand by themselves and that rebuilding efforts should be placed primarily in the hands of the locals.

A local solution should be found for a local problem, the documentary said, echoing the group’s stand. “We need to remember and build upon the many instances when ordinary people fought against terror, rescued the vulnerable, and generously shared their food and resources at the height of the crisis.”

It called on viewers to remember May 23, 2017, not only for the blood spilled in Marawi but also for the humanity that shone through the bravery of those who risked their lives to save those trapped in the combat zones.

In an interview, members of Suicide Squad said they found the imposition of martial law in Mindanao acceptable because it was “different from martial law during the Marcos regime.”

With martial law in place, the movement of firearms within the island is minimized, Ibrahim said.

The documentary was written and narrated by journalist Ed Lingao, and produced with the support of Australia’s Department of Foreign Affairs and Trade.

“Maratabat” can be viewed online through the website and social media channels of International Alert Philippines (www.international-alert.org).