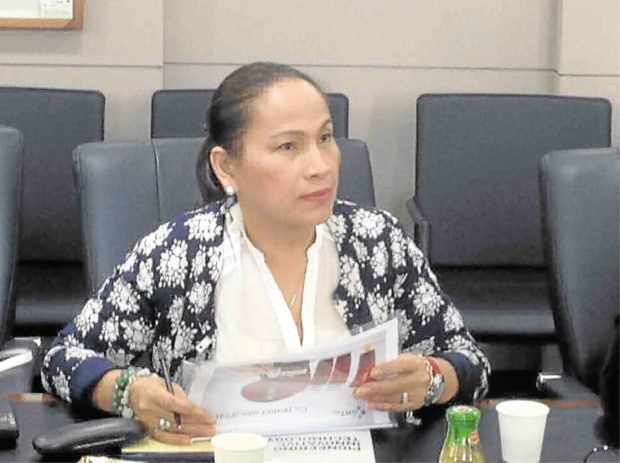 It seems that more problems, including infighting, are unraveling in offices connected to the Department of Tourism (DOT).

In one DOT-attached agency, allegations of corruption have been brought to the Ombudsman, and the complainant is said to be a distant niece of President Rodrigo Duterte.

On May 2, Maria Fema T. Duterte, a member of the board of trustees (BOT) of Nayong Pilipino Foundation (NPF) — a government-owned and -controlled corporation attached to the DOT — filed in the Office of the Ombudsman criminal and administrative complaints against her fellow board members, including its chair, Patricia Yvette Ocampo; lawyer Caroline Lansang, Alicia Manuel, Elizabeth Mercado, Bishop Efraim Perez, Clarence Bringas, Rex Anthony Villegas, and Marie Nino Gerald Medina.

Duterte and the respondents are all presidential appointees.

Louie Aseoche, a lawyer for Ocampo, said the NPF had not been informed about the complaint.

“However, it shall always cooperate with any government agency conducting any fact-finding investigation on the members of the board,” he said in a statement sent to the Inquirer.

Among Duterte’s allegations is the NPF board’s approval of a contract that would allow a Chinese casino operator, Landing Resorts Philippines Development Corp. (LRPDC), to lease government land, where it would develop a Nayong Pilipino theme park for an amount disadvantageous to the government.

Duterte said the government stood to lose at least P517 million a year, or more than P25 billion in 50 years, under the contract.

Aseoche said the contract with LRPDC was being negotiated by the NPF board “at arm’s length.”

“The process even includes securing an affirmative opinion from the Office of the Government Corporate Counsel before the final terms could be mutually agreed upon and signed. External counsels were engaged to secure appropriate legal advice and ensure compliance with existing laws,” he said.

Duterte’s specific complaints against the NPF board include: violations of Republic Act (RA) No. 3019, or the Anti-Graft and Corrupt Practices Act; RA 6713, or the Code of Conduct and Ethical Standards of Public Officials; and civil service rules covering dishonesty, gross neglect of duty, grave misconduct, inefficiency and incompetence.

Two months prior, on March 21, Duterte also filed at the Ombudsman her first complaint against Ocampo for “administrative infractions” for refusing to act on the President’s decision to nominate her as executive director of the NPF.

She said the President appointed her on Dec. 7, 2017, as NPF board member and issued a “desire letter” approving her nomination to the post.

Ocampo and the rest of the NPF board confirmed Duterte’s appointment, but not her nomination as executive director.

Duterte pointed out that instead of acting on her nomination, Ocampo sued her for cyberlibel on Jan. 31 in the Department of Justice. (The case, which arose from Duterte’s Facebook posts about her disputes with the NPF, has been dismissed, a representative of Duterte told the Inquirer.)

Duterte alleged that Ocampo had said “she would only act on the nomination letter of President Duterte upon the dismissal of the case she filed against me.”

Despite the dismissal of the case, Duterte was never nominated by the board.

And in what she interpreted as another violation, Duterte said in her complaint that Ocampo appointed on Feb. 27, 2018, board member Medina as new acting NPF executive director.

Citing evidence from a memorandum issued by the Commission on Audit (COA), Duterte said the NPF board members incurred “unnecessary, extravagant” expenses worth over P7 million, including honoraria and travel perks, without supporting documents.

The board also hired architects for the new Nayong Pilipino Cultural Park in Entertainment City in Parañaque City without conducting a bidding and leased out NPF premises in the NPF Park in Clark, Pampanga, for the operation of stalls and a restaurant with no contracts, among other violations.

He said Duterte “appears to be citing an audit observation (AO) memorandum from the COA. AOs are actually confidential communications between the management of the NPF and the COA.

“The reason why these AOs are confidential is because they are merely ‘interlocutory’ and are still subject to rebuttal and clarification from the management,” Aseoche said.

The biggest and most serious of Duterte’s complaints is the NPF board’s approval of a proposal from LRPDC to lease and develop what is dubbed as “Nayong Pilipino Theme Park, Water Park and Movie-based Theme Park” without an independent appraisal and notice to the public.

Duterte said the agreement was disadvantageous to the government, considering that the current land appraisal values at the new site of Nayong Pilipino, which is in the vicinity of Solaire Resort and Casino and Okada Manila, was P600 per sq m. The lease should amount to at least P57,434,400 a month, or P689,212,800 annually.

The low lease price, compared to the appraised value, would result in an annual loss of P516,909,600 to the government. If the lease amount remains constant, the government would lose P25.85 billion over 50 years.

On Jan. 30, or nearly four months before she filed the cases in the Ombudsman, Duterte sent, through then DOT Secretary Wanda Tulfo-Teo, a letter informing President Duterte of the goings on in the NPF.

In her letter, citing documents her staff had gathered, Duterte narrated that on Sept. 29, 2017, Ocampo and five BOT members, “without any travel authority,” flew by private jet to Jeju, South Korea, to meet with representatives of LRPDC.

Based on the minutes of the NPF board meeting on Nov. 7, 2017—a month before her appointment as board member—Duterte’s letter said Ocampo mentioned that the new Nayong Pilipino in Entertainment City was “with the blessing of the President.”

Ocampo also requested the BOT to authorize her to sign and award the Nayong Pilipino lease contract with LRPDC, Duterte said in her letter.