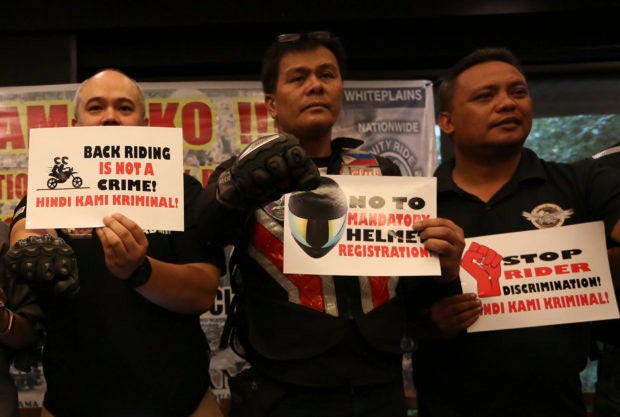 SHOWOF FORCE Leaders ofmotorcycle groups announce the staging of a nationwide unity
ride as a show of force against alleged discriminatory policies and regulations of national and
local government agencies. —NIÑO JESUS ORBETA

Motorcycle riders have one foot in the grave every time they take to the road, Jobert Bolaños of the Riders of the Philippines (ROTP) secretariat said on Thursday.

Yet the final nail in the coffin might not be some tragic road accident, but the “discriminatory” national and local policies that unfairly target them, lament motorcycle owners and enthusiasts.

On May 27, around 5,000 motorcycle riders are expected to take to the road to stage a nationwide unity ride to protest against recent motorcycle-related policies that “underpin the criminal tagging of motorcycle riders.”

They will ride from White Plains in Quezon City to the Mendiola peace arch in Manila to urge President Duterte to deal with their problems.

Other contingents in the cities of Bacolod and Cebu would also be staging a similar movement in the Visayas.

According to George Royeca of Transport Watch Philippines (TWP), one in every three Filipino households has a motorcycle, putting the number of owners in the country at around 16 million.

“But in the eyes of the government, based on the [framing] of existing policies, all of these riders are [criminals],” Royeca said in a press conference.

“This is not just unconstitutional but also immoral,” he added.

Some of these policies include the ordinances in Mandaluyong and Caloocan cities that penalize male backriders, Royeca said.

According to the ordinances, most of the backriders linked to motorcycle-related crimes are men.

But such reasoning “not only has no legal basis, but also perpetuates gender discrimination [and] affects male riders who either need a backride for transportation or for their livelihood,” Bolaños said.

ROTP also voiced opposition to a bill recommending the use of half-face helmets for motorcycle riders so law enforcers could easily identify them.

“That’s very problematic. It’s like they don’t even care whether our faces get smashed as long as they can see our faces,” said Robert Perillo of ROTP.

Such regulations “are only effective in criminalizing us, but not in catching actual criminals,” Bolaños added.

ROTP proposed instead to increase police visibility by strengthening checkpoints as well as rallying the motorcycle sector to engage in crime watch in their communities.

ROTP and TWP also called on the government anew to legalize and regulate motorcycle taxis, much like the service provided by the recently shut-down motorcycle-hailing app Angkas.

Angkas, a ride-hailing company, was ordered shut down last year by the Makati City Hall because it lacked the necessary business permits.

“We believe that there are more advantages to allowing Angkas to operate again. Motorcycles remain the most efficient way to get around given the monstrous traffic in the metropolis,” Bolaños said.

“Under proper regulations, they should be supported given the current situation. They can move more people around, they can commute,” he added.