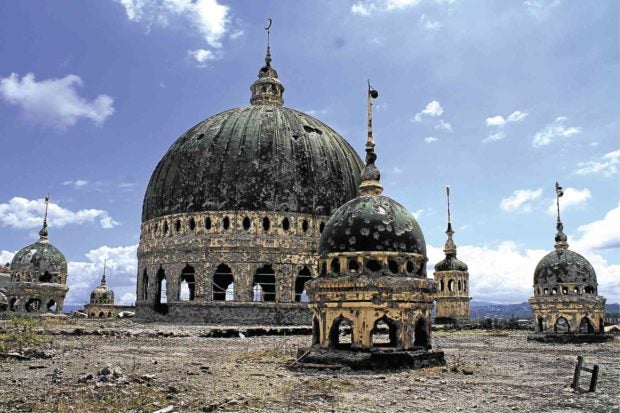 GOING DOWN, TOO The minarets of the Grand Mosque in Marawi City barely survived the war against terrorists and could be among the structures that would be flattened during the city’s rehabilitation. —RICHEL UMEL

MARAWI CITY — Lawyer Jamil Cayamodin remembers the collective sound of calls to prayer from hundreds of mosques in his native Marawi during the holy month of Ramadan.

“You can hear the whole city calls, all at the same time,” said Cayamodin, college secretary of the University of the Philippines’ Institute of Islamic Studies.

“I have memories of those calls to prayer … They were so nice, I miss them,” he added.

But this was before the Philippines’ only Islamic city was reduced to rubble by government air strikes as state security forces fought Islamic State-inspired terrorists who seized the city on May 23 last year.

After the war that raged for five months, not a single mosque was left standing in the main battle area.

As the people of Marawi struggle to make sense of the devastation a year after the siege, rebuilding the mosques has been identified as a priority, giving the war-torn city hope for recovery.

“A mosque is a place of worship for the Bangsamoro. It is a sacred place, a place of hope and mercy,” said Fatima Pir Allian, a Tausug and program director of Nisa Ul Haqq Fi Bangsamoro, a group helping displaced residents.

“It is our foundation of faith and our identity, the trademark of what we believe in and what we are fighting for. The mosque is our home and when our home is a shambles, it causes imbalance,” Allian said.

The government has also proposed building a military camp in the middle of the city, which worries Muslim scholars like Cayamodin because of its impact on the culture and religiosity of the residents.

Cayamodin said he could not imagine a military camp inside an Islamic city like Marawi because it would bring in vices unacceptable to Muslims.

Drieza Lininding, chair of the Moro Consensus Group in Marawi, said the freedom that the residents used to enjoy had always been tempered by an unwritten rule they all followed.

“We were always free to protest, to air our grievances, but there should be no selling of pork here, no liquor, no videoke,” Lininding said.

“But the war had turned us into a silent and disintegrated people. We are afraid to speak our minds now because we fear  being accused and tagged as terrorists,” he said.

Another place of worship that needs to be rebuilt for the city’s Catholic residents is St. Mary’s Cathedral.

Bishop Edwin de la Peña said the cathedral, which was put up in 1934, would have to be rebuilt only after Marawi’s full rehabilitation.

“In the meantime, we focus our energies on rebuilding communities,” De la Peña said in a post on the website of the Catholic Bishops’ Conference of the Philippines.

Rebuilding the cathedral is important, he said, because “Marawi has always been the showcase of interreligious harmony in the Philippines.”

Clearing operations at 24 villages in the main battle zone  are expected to be finished by next month. Most of the roughly 9,191 families (52,802 people) from these villages are still languishing in evacuation centers or staying with relatives.

The government has built temporary shelters for the evacuees, the biggest of which is at Barangay Sagonsongan. But only 700 units of the more than 6,000 shelters planned to be built there have so far been completed. As of April, 624 units had been occupied.

Temporary shelters will also be built at Barangay Papandayan, where the National Housing Authority plans to set up permanent houses for 2,747 families, and at Barangay Dansalan, where an apartment block will rise for residents.

The rehabilitation of areas outside the main battle zone will entail funding of P26.2 billion during the first year of reconstruction, according to the National Economic and Development Authority.

President Duterte, during his visit to Marawi on May 11, asked the residents to be more patient.

“We are rebuilding Marawi. The money is slowly coming in. It can’t be done overnight,” he said.

But the Ranaw Multi-Sectoral Movement suggested that the government instead allow the residents to rebuild the city on their own.

“Let the people rebuild Marawi one house at a time, one mosque at a time, one village at a time,” the group said in a statement.  —REPORTS FROM DIVINA SUSON, ALLAN NAWAL, JULIE ALIPALA, GERMELINA LACORTE, JIGGER JERUSALEM AND RICHEL V. UMEL IN MINDANAO; AND BEN O. DE VERA IN MANILA