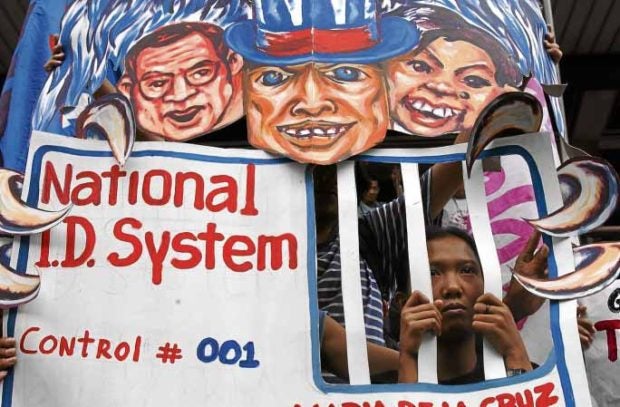 PRIVACY ISSUE Since 2005, critics have raised fears that the proposed ID system will jeopardize the security of Filipinos and leave them vulnerable to violations of their privacy and other rights. —INQUIRER PHOTO

As early as this year, Filipinos will be carrying national identification cards with their personal data that can serve as proof of identity in transacting with the government and the private sector.

Having a national ID card won’t be compulsory, but it will be “very inconvenient” for citizens to manage without one, according to Sen. Panfilo Lacson, chair of the Senate public order committee.

He said the Senate and the House of Representatives reconciled their differences and agreed on a common version of the bill in a meeting of the bicameral conference committee on Tuesday night, putting it on the verge of passage into law.

Under the version adopted by the bicameral committee, only the individual’s full name, sex, birthdate, birthplace, address and nationality, as well as biometric information, will be stored in the ID system, Lacson said on Wednesday.

The two panels agreed to adopt the Senate version with minimal amendments, doing away with the proposal in the House to require sensitive information, such as the cardholder’s parents’ names, permanent address, height and weight.

Both the House and Senate versions provide for the creation of a Philippine Identification System to help citizens establish their identity “as a means of simplifying public and private transactions.”

Besides serving as official proof of identity, the ID card may be presented in requesting social welfare, services and benefits from government agencies, applying for passports and driver’s licenses, opening bank accounts, registering as a voter, and getting admitted to schools and hospitals.

Jose Celorico Jr., an employee of the Makati Public Safety Department, said a single ID card would be more convenient for him. “I don’t have to bring all my IDs (at least six), which may be easily lost,” he said.

Critics have raised fears about the proposed ID system jeopardizing the security of Filipinos and leaving them vulnerable to violations of their privacy and other rights.

Kabataan Rep. Sarah Elago cautioned against the national ID system. “For a regime that holds a record of criminalizing dissent and silencing vocal critics, this could be an additional arsenal for further espionage and repression,” she said.

Beyond the provision of an ID card, the government should deal with people’s demand for better access to quality social services, Elago said.

“What good is an ID, if there are not enough public hospitals, schools and facilities for our people who need these services the most?” she asked.

Edre Olalia, president of the National Union of Peoples’ Lawyers, said that on its face, the proposal would simplify transactions and identification.

“However, there is reasonable ground to be wary that it will be abused to intrude into one’s privacy and liberty,” Olalia added.

“Under more humane conditions where people are free to walk the streets and enjoy the comfort of police protection, I would say ‘yes’ because this facilitates government services to the public. But conditions are not healthy and safe,” she said.

On the contrary, a national ID system can facilitate control of people’s profiles by forces in government that do not believe in the rule of law, Rosales said.

“The measures in Congress on the national ID are designed to infringe on the citizens’ right to privacy, the right against surveillance and other forms of civil rights violations,” said Cristina Palabay, Karapatan secretary general.

The ID system, to be maintained by the Philippine Statistics Authority, put in safeguards against unwarranted disclosure of private information.

In the Senate version of the bill, entities that fail to accept the ID card shall be fined P500,000.

Anyone who commits fraud using the card will be fined up to P500,000 or imprisoned for up to two years, or both.

Willful use or disclosure of a cardholder’s personal data carries a penalty of six to 10 years in prison and a fine of up to P5 million.

The same offense, if committed by state officials or agents with custody of the ID system, is punishable by up to 15 years in jail and up to P10 million in fines.

“Implementation [can happen] this year” when the bill is signed into law, Lacson said.

Davao City Rep. Karlo Nograles, chair of the House appropriations committee, ensured a P2-billion funding for the ID system for 2018.

Full implementation of the program will require P25 billion in five years.

Nograles said the approved consolidated bill “will help prevent another Marawi from happening.”

The House passed the bill in September last year, while the Senate approved its version in March. The final version will be returned to both chambers for ratification and then sent to Malacañang for President Duterte’s signature.