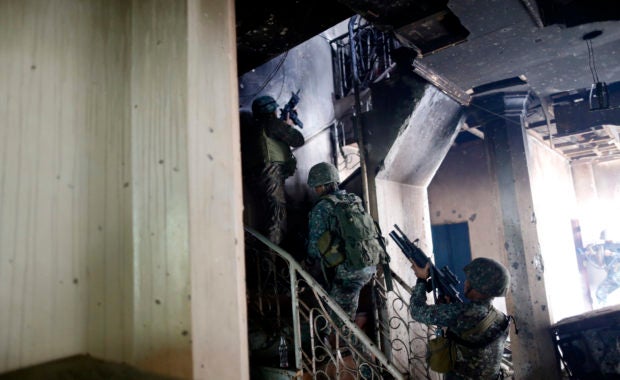 MARAWI CITY — The five-month campaign to retake Marawi City from gunmen loyal to the Islamic State (IS) jihadist group last year introduced the Armed Forces of the Philippines to urban warfare, which had caught by surprise even its battle-hardened troops.

Military, police and local government officials have admitted they underestimated the strength of what they initially regarded as a group of suspected criminals, led by brothers Omar and Abdullah Maute, whose activities had been confined to their hometown of Butig in Lanao del Sur province.

Zia Alonto Adiong, spokesperson for the provincial government, said the military was caught by surprise because it had always dismissed the Maute group as “just a local, family-based terrorist group [that is] not tied with an international terrorist network.”

Col. Romeo Brawner Jr., deputy commander of Joint Task Force Ranao, said that while the military was aware of the Maute group’s plan to seize Marawi, it miscalculated the magnitude of preparations made by the terrorists.

“Looking back, actually we preempted their plan. Their plan was to attack on May 26, which was then the first day of Ramadan,” Brawner said.

National Security Adviser Hermogenes Esperon Jr., in an earlier interview, said the government had seen the crisis coming. He said this was the reason a military operation was conducted in Marawi just before the siege.

The Inquirer was the first to report on the operation at an apartment in Barangay Basak Malutlut, which was adjacent to the Lanao del Sur provincial police headquarters, on May 22.

It turned out that the operation’s target was Abu Sayyaf leader Isnilon Hapilon, touted to be the “emir” of IS in Southeast Asia and one of the leaders of the siege.

Skirmishes resulting from that operation eventually turned into fierce fighting that saw thousands of soldiers, military hardware and logistics deployed to the city.

“All of a sudden different groups started appearing in the city so we were caught by surprise in the sense that we were not aware that there were so many of them already in Marawi,” Brawner said.

The siege, he said, made the military realize that soldiers were not ready for “this kind of warfare.”

“We have a unit trained in urban warfare, the Light Reaction Battalion, which saw action in Zamboanga City. But in Marawi, we saw their number was not enough. We deployed more soldiers — Scout Rangers, Special Forces, Marines and [troops] from the Army infantry battalions — but most of them were not trained in [urban warfare],” Brawner said.

Senior Supt. John Guyguyon, who headed the Lanao del Sur police at the height of the siege, said the authorities “underestimated the capability of the enemy.”

“We did not expect it to happen. We were caught by surprise,” Guyguyon, now Zamboanga del Sur provincial police director, told the Inquirer by phone. “Our security was quite lax.”

Rear Adm. Rene Medina, commander of the Naval Forces Western Mindanao that suffered 35 dead and 399 wounded in the battle for Marawi, said the authorities erroneously regarded the Maute group as a mere “criminal group engaged mostly in drug trafficking in Lanao del Sur.”

The then AFP chief of staff, Gen. Eduardo Año, said the siege could have been prevented as he criticized the Maranao  for not sounding off an early warning.

“The fight against terrorism is not just the job of the military and the police,” Año said on the sidelines of the turnover of command at the AFP Northern Luzon Command (Nolcom) in September last year.

But Adiong, the spokesperson for the provincial government, said it was “preposterous” to blame the people of Marawi and the Maranao for the crisis.

“I’ll put it in one sentence: We are the victims here,” he said.

Adiong was referring to the 1995 rampage of the Abu Sayyaf in Ipil town, Zamboanga Sibugay province, during which 53 people, mostly civilians, were killed and the 2013 siege of Zamboanga City by followers of Moro National Liberation Front leader Nur Misuari, where nearly 200 people died.

Adiong said the local government was never complacent. “It’s not that we allowed it but it was more of an underestimation,” he said.

Philippine National Police Director General Oscar Albayalde said the PNP had to strengthen its intelligence gathering after the Marawi siege.

“Intelligence can preempt and prevent a crime from happening,” Albayalde told the Inquirer in Zamboanga City on May 10.

Brawner said the military started “rewriting our doctrines” after its experience in Marawi.

“We are reorganizing, we are retooling, reequipping and we are retraining,” he said.

“But as a nation, we saw that we really needed to cooperate with each other so we can defeat this violent extremism,” Brawner said.

He admitted that the threat from the Maute group remained seven months after its defeat. “Its recruitment activities are still going on in towns around Lake Lanao in Lanao del Sur,” he said.

Albayalde agreed. “We knew it would not stop. The threat will always be there and I think that with a vacuum in leadership, they will strive to have a new leader,” he said.

Adiong said defeating violent extremism should involve “civilian participation, taking into account the roles of both . . .  Muslims and non-Muslims.”

Guyguyon said the most important lesson the police learned from the crisis was to give importance to reports from  civilians.

“Validate, connect with people in the know, strengthen target hardening and improve programs on police-civilian relations so that we can convince people to help in a timely manner,” he said.

Medina said: “We have failed to capacitate and strengthen our local government, especially the barangays in Marawi to perform their mandate on peace and order.” —With reports from Jeoffrey Maitem, Jigger Jerusalem and Jeannette I. Andrade