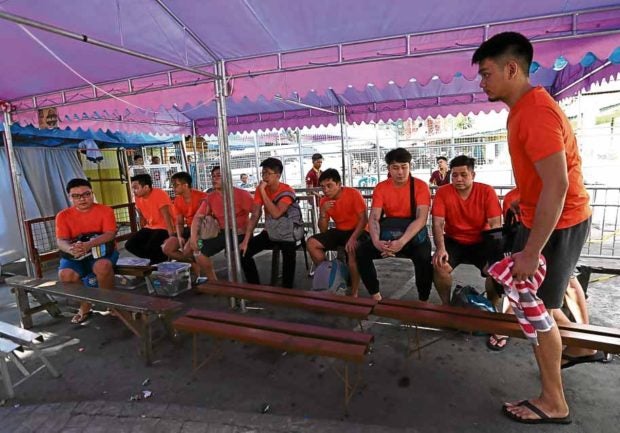 FROM LAW STUDES TO JAIL BIRDS The suspects in the Horacio Castillo hazing death arrive at Manila City jail on Wednesday, after spending two months in NBI custody. —LYN RILLON

The 10 members of Aegis Juris charged over the hazing death of University of Sto. Tomas (UST) law freshman Horacio “Atio” Castillo III broke down in tears upon learning they would be transferred to Manila City Jail from the National Bureau of Investigation (NBI).

And hours before they left the bureau’s headquarters on Wednesday afternoon, the group spent a few moments in silence and prayed.

“They all cried last night (Tuesday). They were surprised,” a source privy to the transfer told Inquirer, adding that the detained fraternity brothers looked “restless and stressed.”

The group was informed by NBI agents shortly before 2 p.m. Tuesday about the court’s commitment order moving them to the city jail.

This was a few hours after their arraignment was deferred in the sala of Judge Marivic Balisi-Umali of Manila Regional Trial Court Branch 20.

They stand accused of  violating the antihazing law in connection with the death of Castillo, 22.

The law student  died after undergoing initiation rites in the wee hours of Sept. 17, 2017, at the Aegis Juris fraternity library in Sampaloc, Manila.

Instead of informing his family, members of the fraternity who were present at the hazing left his body on the street near a hospital and had another member—pretending to be a Good Samaritan—bring the victim to the emergency room. 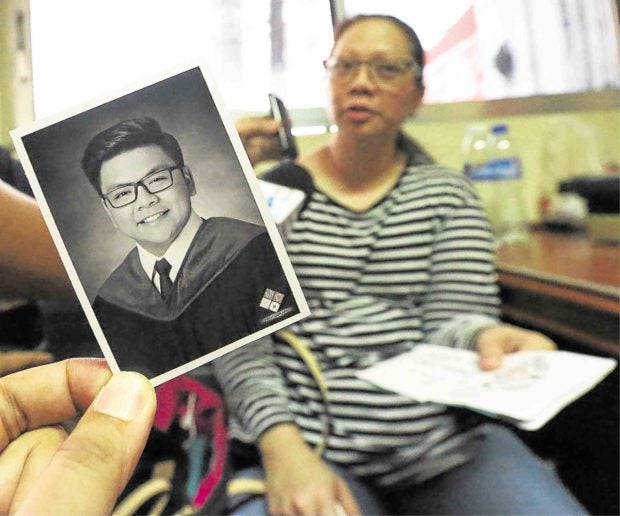 “To start with, the NBI is not the place for them (the suspects),” according to Carmina, mother of hazing victim Horacio “Atio” Castillo, shown here in a September 2017 file photo. —MARIANNE BERMUDEZ

The Department of Justice filed charges against 10 fraternity members in the Manila RTC, which ordered their arrest on March 22. The suspects surrendered to the NBI the next day, their parents asking the bureau to keep their sons in its custody pending a commitment order from the court.

In an interview on Tuesday, Castillo’s mother Carmina welcomed the court order.

“We’re happy that the case is moving,” added Lorna Kapunan, the lawyer for the Castillo family.

Carmina noted that they have a pending motion in the Department of Justice seeking the inclusion of more Aegis Juris members in the charge sheet.

The family is also preparing another complaint to be filed in the Vatican against officials of UST, a Catholic university directly under the authority of the Holy See, for their “inaction” against the suspects during the police investigation, she added. —Aie Balagtas See